North Queensland kept their hopes of a top-two finish alive by defeating an under strength Penrith 38-8 at Queensland Country Bank Stadium.

The Cowboys’ chances of hosting Cronulla in the first week of the finals now hinge on Newcastle upsetting the Sharks on Sunday afternoon.

If the Sharks win, the Cowboys will instead travel to PointsBet Stadium, where they are on a five-game losing streak that pre-dates their maiden premiership win in 2015.

“It’s going to be a big game regardless of where we play,” said Cowboys captain Chad Townsend, who won the 2016 premiership with the Sharks.

The minor premiership locked away a fortnight ago, the Panthers rested 11 of their stars for Saturday night’s game and fielded a team unrecognisable from that which won last year’s grand final. 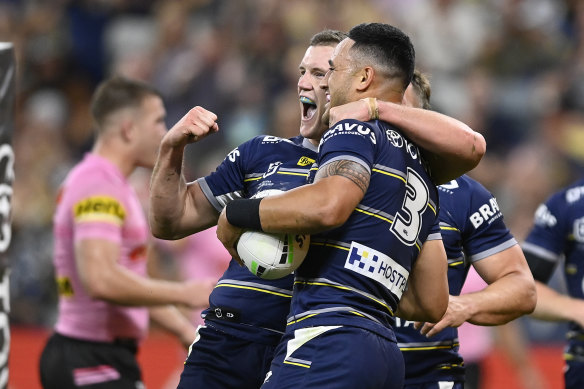 Three debutants and only one premiership Panther, Scott Sorensen, took the field.

Between them, North Queensland’s Townsend, Jason Taumalolo and Kyle Feldt brought 154 more games of first-grade experience into the match than the entire Penrith 17 (465).

But the gulf in experience only began showing on the scoreboard midway through the first half when humid conditions took their toll on the young Penrith forward pack.

The Cowboys did much of the damage on the left edge, with Robert Jennings and Christian Crichton unable to contain State of Origin duo Murray Taulagi and Valentine Holmes, who combined for three of their side’s four first-half tries. 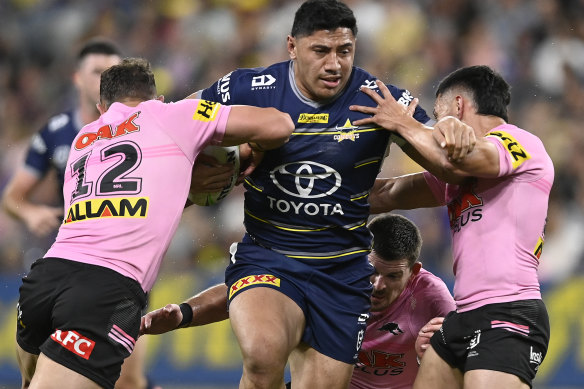 Holmes had his third brace as the hour-mark approached and earned an early mark in preparation for the finals.

Penrith brought renewed intensity to the second half to ensure the Cowboys didn’t turn the result into a cricket score.

The Panthers pegged a try back through Jennings and then another when Sunia Turuva slid over while Penrith debutant Thomas Jenkins was in the sin bin for a professional foul.

But the Cowboys never looked fazed and sealed the result when Hamiso Tabuai-Fidow and Reece Robson scored in quick succession late.

Despite the result, Panthers coach Ivan Cleary said he was pleased with the efforts of his young side and singled out a moment in the final minutes when front-rower Eddie Blacker chased down Cowboys fullback Scott Drinkwater, who had broken the line.

“The guys can certainly hold their heads up tonight,” Cleary said. “We’ve got a good pathways system. We’ve got a lot of people doing a lot of hard work there.”

The Panthers chartered a private plane to fly home on Saturday night and on arrival in Sydney will immediately begin preparations for their qualifying final against arch-rivals Parramatta, the side responsible for two of their four defeats this year.

“I can’t wait,” Cleary said. “These are the times you want to be involved in.”