It was rugby league’s most endearing love story, but sadly Alex McKinnon and his wife, Teigan, have separated.

The rugby league community, and then the nation, got to know the couple through the most unfortunate of circumstances: the tackle in 2014 that left McKinnon with spinal injuries that have confined him to a wheelchair. The injury rocked the league world, but out of that came the inspirational story and love that Alex and Teigan shared.

Alex vowed to walk down the aisle as he fought bravely through his recovery. His promise was inspirational and captured the hearts of everyone in sport.

The couple were married in a beautiful ceremony in 2017 and then had three children. As anyone with kids can confirm, children are amazing, but they require work. Alex and Teigan have three kids under three – including twins – and the stress of that took its toll on the pair. They separated in January and there have been numerous comments on Teigan’s social media feeds about the absence of Alex and that she is no longer wearing her wedding ring.

While neither wanted to talk about their split, they are more than aware of the love and support they received in the good times and they know of the interest in their separation now. There is no ill will between the pair, who privately concede that after 12 years together, from the time they were high school sweethearts, they are now more likely to find happiness on their own.

They are committed to co-parenting their children and they will do so as friends.

Alex McKinnon and Teigan at the 2017 Dally M awards.Credit:Getty

Alex has also left the Knights, where he was their recruitment officer. He helped the club sign some very promising players. He is now working for Fox Sports as a sideline reporter and analyst, while studying at university.

When we asked him about the split, Alex declined to comment but said there would be a time when he would do so. He said that he understood the interest in the story, as they had been a very public couple and had received strong support when together. He has no issue with a story being written. Alex has strong family support and he will ensure Teigan has all of his.

Pressure is mounting on super recruiter Peter O’Sullivan as the Dolphins’ 2023 season threatens to be a write-off. O’Sullivan has a big reputation in the game built up through his media contacts, but the failure to turn the Warriors around, and now missing out on Kalyn Ponga, on top of other big-name targets such as Reed Mahoney, has increased the pressure on him. He is telling people that the Dolphins have about 15 contracted players, but so far none are headline acts.

The NRL is keeping a close eye on developments at the Dolphins. They obviously want the competition’s first new team since 2008 to be a success.

St Helens are sniffing around the NRL for a halfback and, after the rebirth of Jackson Hastings following his English stint with Salford and Wigan between 2018 and 2021, it could be an attractive offer for a No.7 who is battling to take the next step in the NRL. 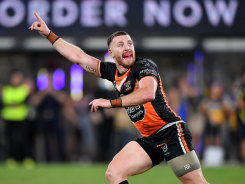 Hastings’ journey can’t be underestimated. It’s not a stretch to say his career was done and dusted in Australia after he fell out with the Sea Eagles, where he was very poorly treated, in 2018. His family didn’t want him to go to the UK, but his agent, Sam Ayoub, told Jackson and his mum that was his path. “He will go over as a boy and come back a man,” Ayoub predicted. He was right. There might be a chance for another young half to follow Hastings.

Eels great Ray Price and other concerned Parramatta people, including former sponsor and fan Andrew Eagleston, have written a letter to chairman Peter V’landys and the ARL Commission about the plight of the Eels juniors, asking questions about how Manly are able to recruit so many of their young potential stars.

They want an investigation into that and what they say is a collapse of the junior league. The letter reads, in part: “The Parramatta Eels junior league is in such a state of disrepair the Parramatta junior league has had to merge with Canterbury to ensure there is a competition in 2022 in many age groups.

Tariq Sims should never have been made to feel unwanted by the Dragons and is the last player they should be allowing to leave the club early. However, as much as he loves his teammates, Sims feels he needs to get out of the club as he believes he is no longer a part of their plans. The tip is he will starting from the bench in the Anzac Day clash against the Roosters. If there is one forward you’d want to be starting to capitalise on the emotion of the day, it’s Sims.

However, from the moment we revealed he did not have an offer for next year, Sims’ time at the club he loved was limited. It is understood he has asked for an immediate release twice in the past week or two. For once in his career, he is putting himself ahead of his club.

He will be on about a third of his current deal when he joins the Storm, but his desire to get to Melbourne now is the eye-opener. He’d have to leave his family in Wollongong and take himself to Melbourne without them if he leaves now. If you know Sims, that’s a huge sacrifice. But, he wants a title win and is prepared to do whatever it takes to get that.

‘I’m not that crazy’

Victor Radley is one of the game’s elite forwards, but he admits he is looking towards his NSW No.13 rivals for guidance as he finds his way in the PC world of the NRL that makes it harder than ever for players who live on the edge.

“I know where I’m heading towards,” he said. “Last year I got myself in strife and I just know that at my age I know my importance to our side, and sitting on the sideline isn’t where I need to be.

“I wouldn’t say it’s difficult to reach a balance, but I need to find the good balance of hardness and toughness, and playing 80 minutes every single week. I think there’s some blokes doing it at the moment who I can look towards and take a leaf out of their books.

“I just think the best examples for me are Isaah Yeo and Cameron Murray over the last few seasons. They play 80 minutes every week … I know that, in my position, they are setting the benchmark at the moment.”

Radley had his issues last year: the game against Brisbane, when he was sin-binned twice and placed on report four times, was his most volatile display. He says it is wrong to judge him on that display.

“I think a lot of people will see me like that … like I might lose my cool easily,” he said. “But I’d like to think that I’m actually not that crazy. I think even when everyone thought I lost my cool against Brisbane, I probably look like I did, but when I got 10 in the bin, I wasn’t banging my head against the wall or anything, I was actually sitting there calm and collected and I wasn’t thinking about going out and smashing anyone again or do anything like that. So, I think I can be perceived that way, but I like to think I’m pretty calm-headed.”

Johnny on the spot

The rise and rise of Siosifa Talakai has plenty of people claiming his success. The truth is he was on the NRL scrap heap when South Sydney let him go in 2017, before then Cronulla coach John Morris gave him a train and trial deal for 2020.

Talakai worked his backside off that pre-season and got a spot in the Sharks’ top 30. A lot of hard work – and some good coaching – went towards getting him fit and firing, and he finished 2020 with the players’ player award.

The Sharks’ resurrection under new coach Craig Fitzgibbon has been impressive, however, some credit must go to the previous regime. Out of Thursday night’s team that beat the Sea Eagles, players Morris either signed, gave a debut to or brought through the juniors included Will Kennedy, Sione Katoa, Jesse Ramien, Talakai, Ronaldo Mulitalo, Blayke Brailey, Toby Rudolf, Teig Wilton, Briton Nikora, Royce Hunt, Braydon Trindall and Cameron McInnes.

Fitzgibbon has turned that quality into a class outfit, but you can see why he chose the Sharks to make his first impressive entry into top-grade coaching.

Kevin Walters needs to keep an eye on some of those who are closest to him when it comes to his coaching future. Not everyone who is supposed to be in his corner really is. It’s a story that could really develop if the Broncos are not firing later in the year.