The fate of $20 million in annual funding and control of the Blues State of Origin team hangs in the balance as the ARLC and the NSWRL sweat on a decision in their legal stoush.

The parties faced off in the Supreme Court on Thursday after the NSWRL took action when the ARLC ceased providing the state’s monthly funding payments of $1.77 million.

The controlling body, under the advice of leading silk Bret Walker SC, claimed the NSWRL had “fundamentally failed to follow its own constitution” in not allowing Cronulla CEO Dino Mezzatesta to contest a NSWRL board position at February’s AGM, dismissing conflict of interest arguments and demanding that fresh elections be held in order to vote for two new metropolitan directors.

Failure to do so, according to the ARLC, represented a breach of the services agreement between the two parties and could result in it being terminated as soon as Thursday.

Court documents show the NSWRL has net assets of $32.3 million and that funding from the Commission had increased threefold since its inception in 2012.

The case boiled down to several key points, including whether Mezzatesta should have been excluded due to a conflict of interest given his club role. 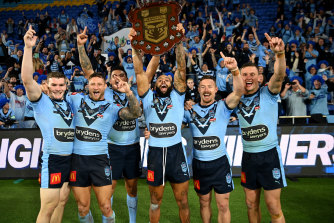 A court decision will decide control of the Blues.Credit:NRL Photos

“The real complaint is it is not the board the ARL wishes us to have,” said barrister Rob Newlinds, acting for the NSWRL.

Newlinds further argued that a funding budget agreement was in place, pointing to the fact money continued to be paid year on year from head office at a consistent rate.

“They have approved funding and cannot unapprove it,” said Newlinds.

While Justice Michael Ball reserved his judgement, he made it clear he disagreed on that point.

“I can tell you now you are going to lose the approval argument,” Ball said.

The NSWRL was expecting to generate more than $6.2m from the exploitation of this year’s Origin commercial rights. However, control of the team, including player selection, and the ability to propagate grassroots football remain in limbo until a verdict is delivered.

With the opening Origin game just over a month away, the parties are sweating on an outcome that will determine who controls the marquee event.

The matter has divided long-time blues powerbrokers. NSWRL chairman George Peponis and Nick Politis resigned over issues including Mezzatesta’s exclusion and the ousting of the only female director, Deborah Healey.