The AFL’s head-high free kick warning has divided coaches, with some praising the move as proactive and others criticising the league for caving to public demand.

Melbourne coach Simon Goodwin backed the AFL’s stance on high tackles, saying their decision to issue a reminder was a “fantastic” move that would help improve the game overall. But Western Bulldogs coach Luke Beveridge called the league out for “flinching” in the face of speculation.

Milking free kicks has become a sticking point as questions emerged around whether the umpiring of players like Collingwood’s Jack Ginnivan differed from other players.

The league told clubs on Tuesday that any player who ducks or shrugs into tackles will not win head-high free kicks, noting that using their heads to draw frees would not be tolerated, let alone rewarded.

If a player draws high contact by ducking to the ground before a tackle, the game would continue as normal and no free kick would be awarded.

Goodwin said on Wednesday that head-high free kicks were not something the club coached into their players, adding that it was a reminder that every player, coach and administrator should keep in front of mind. 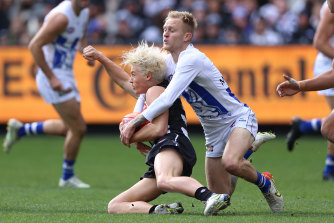 In the spotlight: Jack Ginnivan earned a high-contact free kick from this Jaidyn Stephenson tackle.Credit:Getty Images

“I think it’s fantastic that they’ve [the AFL] been able to come out and this is what they’re going to focus in on from an umpiring perspective.”

Hawthorn coach Sam Mitchell echoed Goodwin’s sentiment, backing the league’s move due to the risk high tackles place on players’ heads, but added that the true impact of the ruling would only become evident with time.

“I think it’s probably a good call, hopefully it means we see less chances of getting hit in the head,” Mitchell said on Wednesday morning.

“I think in general when they make rule changes, it’s for the better, so let’s hope it’s true on this occasion.”

However, Beveridge said the AFL had “flinched” following pressure from the media and supporter bases.

“Let’s not change the game and the interpretations. It’s been there forever,” Beveridge said.

“Using Joel Selwood as an example, the reason why Joel Selwood gets a lot of head-high free kicks is because he’s probably the hardest on the football and on a loose ball, on a contest and at a competition. So reward him for it.

“If you’ve got techniques that ultimately entice a clumsy or an undisciplined tackle, good luck to him, and he deserves every free kick that he gets.”

Beveridge said he was concerned what it may mean for the game in retrospect since it could put some star players’ tactics into question when Beveridge believed they should be praised.

“Let’s not victimise that sort of behaviour because it should be rewarded, not penalised.”

Goodwin reiterated the challenge facing umpires and said the league’s warning was a positive step.

“It’s not a great look for our game where we try to draw free kicks, but it is a tough thing to umpire,” Goodwin said.

“For the AFL to come out say ‘this is what we’re looking at’, and we can pass that message onto our players. Hopefully we can try to eradicate this type of stuff out of the game.”

Beyond eliciting an unfair advantage, the players are risking their own health, according to medical practitioners familiar with the sport. Shrugging into tackles could result in concussion, brain injury and neck injury, and should therefore be avoided wherever practicable.

Both Essendon midfielder Zach Merrett and Brisbane midfielder Lachie Neale admitted they had been confused by the number of free kicks awarded for high tackles this year because they were always under the impression that if a player instigated the contact, they would not receive a free kick.

“I was under the assumption that that’s holding the ball. You’ve given your opportunity by lowering your knee or raising your elbow to get the free kick,” Merrett said on Fox Footy on Tuesday.

“We don’t want to encourage players to play for that free kick.”

Neale said the beauty of the game was at risk if players were to continue taking advantage of the head-high free kick, but understood the appeal behind it where the scoreboard was concerned.

“You want players to try and evade the tackler rather than sort of go at them and I think that provides great highlights when you see guys trying to evade the tackle. You can get some really special bits of play. I’d rather see that in the game than people ducking and lowering their knees,” Neale said.

“But to the players’ credit that have been able to do it and get free kicks for your team, especially in front of goal, then I can understand that they’re making the most of it.”