The year started as another one in which NSW, chasing their fourth series win in the last five years, were poised to be heavy favourites but with each week the Origin pendulum has seemingly swung back towards Queensland.

The Maroons have a new coach, a fearless bunch of in-form players from the resurgent Cowboys and Broncos and a chance to end a rotten recent run at Accor Stadium in one of the most highly-anticipated series openers in recent memory.

Here the Herald breaks down the three key areas in which the opening game will be won and lost with the victor to take a huge stride to Origin supremacy before game two in Perth.

Recent history shows almost every match played at Accor Stadium is a tight affair. In fact, eight of the past nine Origin games in Sydney have been decided by six points or less.

It makes the kicking game of both teams vitally important, particularly given Sydney’s milder climate lends itself to a dewy surface, as opposed to the faster and drier ground at Brisbane’s Suncorp Stadium. 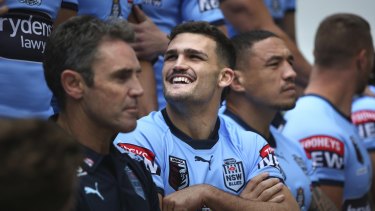 Nathan Cleary’s kicking game will be vital for the Blues.Credit:James Alcock

That’s where Nathan Cleary comes into the equation. The NSW No.7 arguably has the best kicking game in the NRL, perhaps only rivalled by Brisbane’s Adam Reynolds.

NSW Blues officials asked their utilities manager to switch the floodlights on at their training ground at Sydney Olympic Park on Sunday afternoon, knowing Cleary would be relentlessly practising his goalkicking and short kicking long after his teammates had left the field.

In injured Queensland prop Christian Welch, Cleary doesn’t have to face his version of mini-Kryptonite. The Storm prop has made a habit of harassing Cleary’s kicks in big matches, and it was no surprise the Penrith star was in control when Welch was ruled out in the opening minutes of the preliminary final against Melbourne last year. 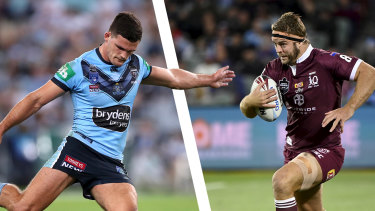 Champion Data statistics reveal Cleary (17.4 per game) kicks more regularly in 2022 than any other playmaker on the Origin field on Wednesday night. His NSW and Penrith teammate Jarome Luai (3.2) and South Sydney hooker Damien Cook (0.4) are not noted kickers.

But Queensland will have a multitude of options with the boot, including Ben Hunt (13.2), who carries the can when halfback for the Dragons. Queensland halfback Daly Cherry-Evans (14.9) and five-eighth Cameron Munster (7.5) also give Billy Slater options with his team’s kicking game.

The Slater ploy to start Hunt at hooker and shift Harry Grant to the bench will keep NSW guessing with Hunt likely to take his share of kicks from dummy-half.

In fact, Cleary (28.4) averages less metres per kick than all of Queensland’s main men in Hunt (33.1), Cherry-Evans (31.3) and Munster (29.5), but that is due to Cleary’s Penrith dominating the field position battle and needing him to supply shorter, attacking kicks rather than long, clearing ones.

But with NSW likely to rely so heavily on one kicker, how effective can the Maroons be in pressuring Cleary?

Asked about his relentless preparation, Cleary said: “It’s important for my headspace any week. It’s probably magnified more on the biggest stage in Origin, but it’s just my way of preparing and gaining peace of mind. If something goes wrong on the field, I can look back and say my preparation was right.”

Do the Maroons have the line speed to match NSW?

Brad Fittler’s first NSW team in 2018 was chosen with one thing top of mind: speed.

And ever since then he’s also liked to choose mobile forwards who can dominate around the middle, rather than bigger ones who lumber. 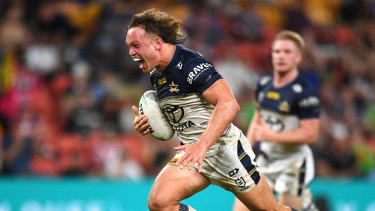 Reuben Cotter streaks away for a memorable Magic Round try.Credit:Getty

On face value, it was a strange comment given the hostility of opposition crowds. But what he said was exactly right, the drier and faster grounds played into the hands of NSW’s big men and Cook, which allowed their outside backs to sparkle.

One of Slater’s big selection calls has been to parachute Cowboys young gun Reuben Cotter into the starting lock role on debut. He would be the shortest middle forward on the field, but his speed around the middle will no doubt have the Blues defence on red alert.

We played them at the start of the year and I didn’t sort of know who he was, but I’ve watched a few games since and he’s been carving up

“He’s been playing some great footy,” NSW captain James Tedesco says. “We played them at the start of the year and I didn’t sort of know who he was, but I’ve watched a few games since and he’s been carving up.”

Says Cook: “Cotter is going to bring great leg speed in the middle there and [Josh] Papalii is playing some great footy. And Tino [Fa’asuamaleaui] as well. There’s a lot of leg speed and go-forward there and a lot of talent for them to capitalise off the back of.”

How do NSW play without Tom Trbojevic and Latrell Mitchell?

Tom Trbojevic’s injury-enforced absence is a bigger one than maybe first thought, because it’s going to force Fittler to change the way the Blues play. 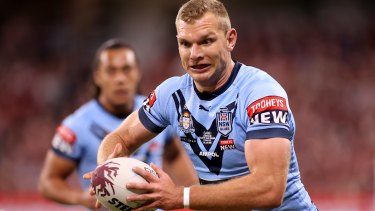 Tom Trbojevic will miss the entire series for the Blues.Credit:Getty

In Trbojevic, who played at right centre, NSW trusted a traditional fullback who carved Queensland up through the middle and down the left in the opening two games last year. He had a licence to go where he wanted, pretty much when he wanted, and the sight of him linking up with fellow centre Latrell Mitchell was enough to strike fear into even the coldest Queensland heart.

In the record game one rout in Townsville, performance charts showed Trbojevic touched the ball in Queensland’s half just as many times on the left-hand side of the field as he did on the right.

But with less experienced centres such as Kotoni Staggs and Stephen Crichton, both on Origin debut, and usual five-eighth Jack Wighton, it’s unlikely the Blues will be swinging an odd man to the other side of the field like Trbojevic.

Instead, expect them to play more through the middle with the Panthers combination, led by Isaah Yeo and Cleary.

“I’m not going to say we’re not going to have someone doing something similar, but we’re just working to our strengths,” Fittler says.

Watch the State of Origin exclusively live and free on Channel 9 and 9Now.