After seven straight Test defeats to Eddie Jones-coached sides, Michael Cheika finally broke a six-year drought against his former Randwick teammate in a week when he spent the least amount of time in camp.

Cheika’s ambitious plan to look after Lebanon’s rugby league team at the World Cup while juggling commitments as Argentina’s rugby union coach paid off in remarkable fashion as the former Wallabies boss helped orchestrate the Pumas’ first win over England since 2009.

After a week of zigzagging across England, devising strategies in the 13- and 15-man games for matches on Friday night with Lebanon against Australia and then on Sunday with Argentina, Cheika can sleep easy knowing he’s finally won bragging rights over Jones.

At the same venue where the Wallabies, under Cheika, booted England out in the pool stages of a home World Cup in 2015, Argentina continued their steady progress in a statement victory, two months after stunning the All Blacks with a 25-18 win in Christchurch.

Sunday’s match ended at two tries apiece and no team got further than eight points ahead. England led 29-27 with 10 minutes remaining but an Emiliano Boffelli penalty in the 70th minute got the Pumas ahead. 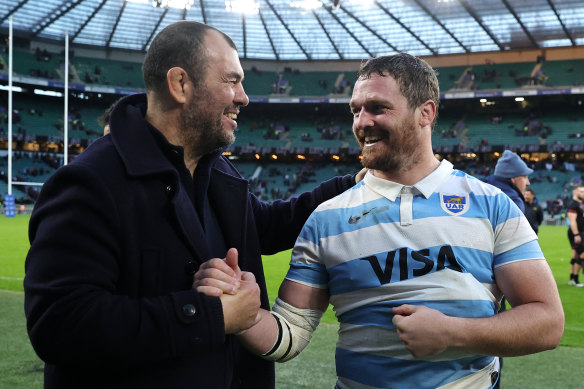 Michael Cheika shakes hands with Julian Montoya after the win over England.Credit:Getty

“It was good … tense as well,” Cheika said. “I really liked the way the guys had a really good attitude during the week. None of them had won here before, so it was a question of giving them that mental side to go with the technical and tactical.”

Cheika has been played off a break by Jones since the infamous 2016 series in Australia that England won 3-0. That series was remembered for a number of sledges in the media. 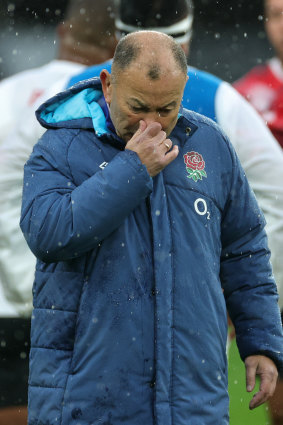 The result ultimately led to Cheika resigning after five years in charge of Australia with a win record of 50 per cent.

Jones and Cheika are certainly not enemies and have a healthy respect for each other, having forged paths coaching all around the world.

The next chapter of their healthy rivalry is set up beautifully, with England and Argentina set to square off in their first match of next year’s Rugby World Cup on September 9 in Marseille.

“I’m not sitting here thinking we have really strong problems. For the most part, we dominated the game. I reckon if we play that game 100 times, the result won’t be the same.” 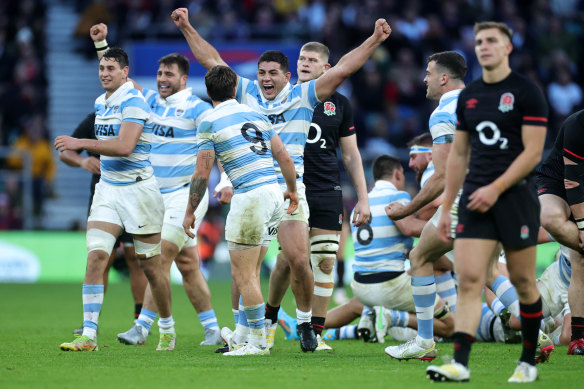 Less than 48 hours after sitting in the Lebanon coaching box for their 48-4 quarter-final defeat to the Kangaroos in Huddersfield, Cheika had a big grin after full-time in London as Argentina continued their impressive form.

On Monday, Cheika was with the Pumas before heading back to Leeds to be with Lebanon. On Wednesday, he dabbled in both codes, before a knockout World Cup league match on Friday and a rugby Test to end a crazy week that any coach is unlikely to attempt again.

The Pumas’ one-point victory makes Cheika’s seven-game winless run with the Wallabies against England even more difficult to comprehend.

For Jones, this defeat will sting, particularly given Cheika has been doing two international coaching jobs at once. Argentina’s resources do not compare to what England have access to.

While it would be naive to write off Jones, the public perception of the Australian is changing. Take this from the London Telegraph match report.

“When does this start translating into serious pressure for Jones? He is being paid £750,000 a year to turn England into world-beaters, and he has just been outsmarted by an old friend who has spent much of the past week coaching Lebanon’s rugby league team. The excuses are running out, fast, with New Zealand lurking on the horizon in 13 days’ time.”

Watch all the action from the Wallabies’ Spring Tour with every match streaming ad-free, live and on demand on Stan Sport.