If revenge is a dish best served cold, on Sunday at the MCG it arrived cryogenically.

Geelong were cold in the sense of clinical as they dished out their second thrashing this season of Richmond, their conqueror in last year’s grand final. The Tigers were just cold. 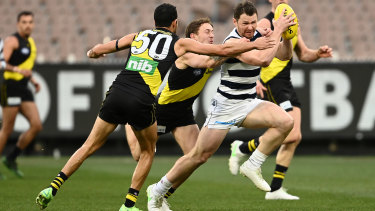 Patrick Dangerfield was a real standout for the Cats.Credit:Getty Images

The day was biting Melbourne winter cold, far removed from the tropical air of last year’s Gabba finale. And the absence of a crowd made for a cold atmosphere, though by now we ought to be getting used to it. Sometimes it looked, and felt, like match simulation, though doubtlessly not those on the end of the many tackles.

It wasn’t really revenge, of course. The Cats can never get back the 2020 flag, nor can the Tigers be stripped of it.

But the Cats satisfied two needs. One was to reconfirm themselves as an authentic contender this year. The other was to just about destroy the last of the Tigers’ pretensions. At best now, they have been relegated to a competition with other speculators for eighth spot, so far behind the others that it is really a kind of wild card. 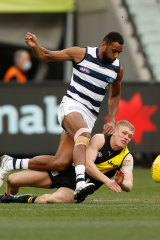 Ryan Garthwaite of the Tigers and Esava Ratugolea of the Cats compete for the ball at the MCG.Credit:AFL Photos

In truth, this was the expected outcome. From last year’s premiership 22, the Tigers were missing seven, including four of the top 10 in their best and fairest. It was a gaping hole. The signal moment in last year’s grand final was when Dustin Martin shrugged off Patrick Dangerfield to kick a goal. On Sunday, Martin was far away and will be for the rest of the season, and Dangerfield was as good as anyone on the MCG.

Oddly enough, in the absence of Jeremy Cameron and Shaun Higgins, the Cats were more intact as their 2020 selves. From their grand final team, there were four changes, but two were retirees Gary Ablett and Harry Taylor, and only Mitch Duncan from the top 10 in the best and fairest was unavailable.

One of the points of difference, Esava Ratugolea, indeed distinguished himself with four goals and a hand in at least three others. Jeremy who? “I’ll play wherever they want me to,” said Ratugolea. “I’ll just keep competing.”

Richmond started hot, in the sense of applying heat rather than running hot. It’s what lesser teams do trying to cover a gap in class, but the Tigers have turned it into the way to go. Of course, that undersells the sophisticated method in their apparent madness. But it does revolve around madness.

For the first three-quarters of an hour, the game was a tumbling tangled jumble. But when the wick lowered, and as the niggles mounted, the Cats bolted. Five goals in quick succession split the game open and would prove insurmountable. Ratugolea had a hand in four. Tom Hawkins weighed in at regular intervals on his way to four of his own. 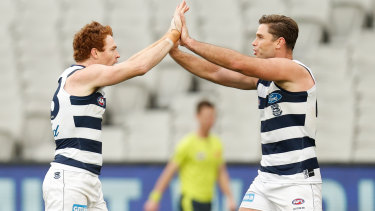 Gary Rohan (left) and Tom Hawkins of the Cats celebrate a goal.Credit:AFL Photos

Really, that was the game, stone cold dead. Richmond’s sorest point this year has been scoring, so a seven-goal deficit was bigger than the Commonwealth’s. The Tigers’ pride asserted itself early in the second half, their precision not so much. Two early goals were undone by three blatant misses and the effort ebbed.

The Cats were now playing their rolling game, looking more and more polished. Impenetrable defence feeds into high-voltage midfield, into ever-potent forward line. The question now is how far it can take them.

The Tigers could take some heart. Matt Parker, detailed to simulate Martin, managed passably, which is to say he was about half as good. Daniel Rioli’s re-education as a defender continued apace. But Jack Riewoldt and Trent Cotchin were little seen, and Tom Lynch not even that much. That tells you that the Tigers’ future is behind them – or far, far ahead.

One detail from last year’s grand final had not changed on Sunday: Norm Smith medallist Dustin Martin was in Queensland. Sadly for the Tigers, it was because he is still recuperating from a serious kidney injury he suffered against Brisbane in round 18 that put an end to his season. More happily, he was released from hospital this day. But he will remain in the Sunshine State for now until he is fit to travel. Quarantine is not an issue: he arrived in Brisbane two days before Queensland imposed restrictions on Victorians. Quinton Narkle provided lively relief.

Veteran Geelong captain Joel Selwood was hurt in an early clash and was only a peripheral figure in the game before he was subbed out early in the third quarter. What was distinct this time was that he injured his leg, rather than his head. It did not appear to be serious, but the Cats had one eye on the here and now and one on September.