Willie Mason is back at Belmore and desperate to help his old club because “the Bulldogs are not meant to finish last”.

Canterbury supremo Phil Gould posted video footage of Mason running his eye over a training session on Monday, and the 41-year-old premiership-winning front-rower confirmed to the Herald he was more than happy to accept Gould’s invitation to come home. 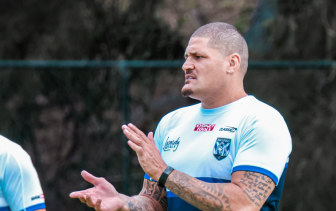 Big Willie Mason is back at Belmore.Credit:Canterbury Bulldogs

Mason has resisted returning to clubland for six years since he retired, but says he is ready to finally give back to the club that delivered him his only title in 2004 – and cannot wait to work with firebrand forward Jack Hetherington.

“I’ve always had a good relationship with Gus, and I played with ‘Baz’ [coach Trent Barrett] at Origin level and on Kangaroos tours.

“I was asked to do some stuff with the club last year, but there was COVID, and I didn’t like some of the politics going on. But I have a good relationship with new chairman John Khoury, and when Gus got involved, it made it easy to come back. 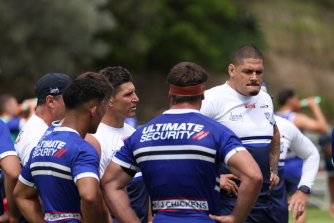 The premiership-winning front-rower was happy to accept an offer from Phil Gould to return.Credit:Canterbury Bulldogs

“Gus helped build that club. I know he’s passionate about the juniors and rediscovering that culture and DNA, which the club seems to have lost the last three or four years.

“When we had meetings, I said, ‘I know the club, I know the DNA, I know what I can bring to the club’. I’m passionate about helping the team and the juniors develop physically and mentally.

“I want to show them what it means to put the jersey on, not just for them but to everyone who has represented this club.

“People need to appreciate what it means to be a Bulldog. It’s not a case of rolling up and collecting a pay cheque, which seems to have happened the past few years.

“It’s been hard to watch. The Bulldogs are not meant to finish last.

Mason said the immediate challenge was getting so many different recruits to buy into the ‘Bulldogs way’, which to him means “toughness, never giving up”.

“When I finished playing I didn’t want to go straight back into fold, life is fun and there’s more to rugby league,” Mason said.

“But it’s time I give back to the game and the club. I have a lot of knowledge, and it would be a waste if I didn’t help the next generation.”

Mason watched a handful of defensive drills on Monday and there were things that immediately stood out to him. Known as one of the loudest on the field at any given training session or game, Mason said “communication” was a big thing, and players needed to be forever talking to each other around the ruck.

As for working with Hetherington, a country boy who hits hard with an unenviable disciplinary record, Mason said: “I love Jack. He’s the guy I can’t wait to work with. I spoke with him a fair bit last year.

“He’s ‘M.A.D’, but it’s not the 2000s when guys like Adrian Morley and Gordie Tallis were doing their thing. It’s fine to be aggressive, but you can’t cross that line, otherwise you will cost your team.

“He might play on an edge, he might be in the middle, but he’s fast and has skill and he’s just a footballer.”

There is a lot of excitement about the Dogs, who collected the wooden spoon in Barrett’s first year but have recruited heavily, with Tevita Pangai jnr, Matt Burton, Josh Addo-Carr, Matt Dufty and Paul Vaughan among their key signings.

Skipper Josh Jackson resumed training early, and Mason said the forward who has endured the dark times “epitomises what it means to be a Bulldog”.