Melbourne coach Simon Goodwin says Steven May has “broken some trusts” within the playing group but wouldn’t confirm whether the suspended key defender is now on a booze ban.

The Demons’ premiership defence has been rocked by a fight on Sunday night between May and utility Jake Melksham, the latter since having had two surgeries on an infected hand as a result of the incident. 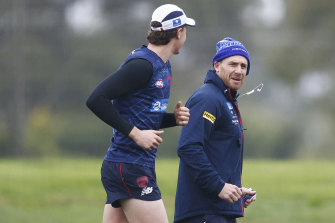 May was suspended for a match for breaching team rules by drinking while sidelined under concussion protocols.

Both men must do community service, coming after it emerged that Melksham was trying to pull May into line for sledging teammates when the disagreement turned physical at a night defender Joel Smith had organised.

Goodwin, speaking publicly for the first time since the incident, said May had work to do to regain the trust of his teammates.

“He has done a lot of work on himself personally over a long period of time. We are really proud of how far he has come as a person, and he is a quality person,” Goodwin said. 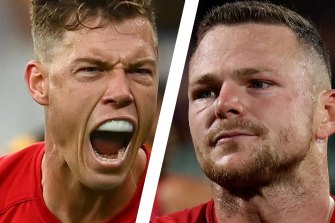 “He knows he has let them down and broken some trusts in the playing group and he will work hard to build that back up. Knowing the character of Steven, he will go about that in the right way.”

The altercation between the pair at the Entrecôte restaurant in Prahran escalated on the street, and is now under review by the AFL’s integrity department.

Goodwin wouldn’t elaborate when asked whether May, who has previously found trouble when drinking, was on a booze ban.

“We will work with Steven around his personal situation. It’s not something for the public domain. Steven is a quality person, he has worked really hard on himself. He will continue to do that,” Goodwin said.

The premiership-winning coach dismissed suggestions there was a divide between those who played in last year’s grand final and those that didn’t.

“There is no divide, they are united, and will continue to forge ahead and try and do something special,” Goodwin said.

“This incident isn’t going to define our playing group. They are united. They are committed to the cause, they know they have made a mistake. Hopefully, in time, people will see this as a real galvanising time for us.”

Goodwin insisted Melksham did not have a broken hand but admitted the infection was serious. He said the medium-sized forward had twice had the infection “washed out” under surgery.

“He has gone in twice. It is a serious infection and one that we need to get on top of,” he said.

Goodwin said he did not condone violence in any form.

“I don’t tolerate violence in any form and I don’t think anyone does and that’s why the sanctions are in place but we have worked really hard to build respect for each other within our environment, how we talk to each other, how we recognise each other, how we celebrate each other, is really important,” he said.

“So, if that’s how the conversation started in and around that topic, it’s a worthy conversation to have and a worthy topic to talk about.”

The incident has overshadowed what shapes as a Queen’s Birthday blockbuster against Collingwood at the MCG on Monday, with the Demons desperate to end a two-game losing skid.

“I think Max [Gawn] summed it up well when he said it was embarrassing for everyone that is involved in our footy club. We have worked really hard to build what we have built internally and, obviously, externally that is shown out on field,” Goodwin said.