Sunday’s game at the Gabba posed an interesting experiment. What would happen when Essendon, a side that seems to have forgotten how to defend, came up against the Brisbane Lions, a side missing most of its defenders?

And who needed it more? On the face of it, that would be the Lions, who have been wobbling in their quest for a top-four spot and another run at September. But for the Bombers, losing against such a weakened team had ugly implications. 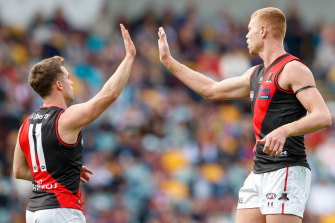 Peter Wright (right) helped get the Bombers over the line.Credit:AFL Photos

Essendon saluted in the end, but not without a mighty struggle, scraping home by 10 points after Matt Guelfi kicked the final goal after the siren. It was the first Lions loss at the Gabba since the semi-final against the Western Bulldogs last year.

It leaves the Lions vulnerable, fourth on the ladder, ahead of fifth spot on percentage only. They’ll be desperate to get some players back, but they won’t get them all by next week to face the Giants in Canberra.

Once again, the biggest query regarding the Lions is their midfield. The Bombers consistently waltzed away from the centre to score. Jarryd Lyons, so solid in the last two years for Brisbane, struggled again with 17 possessions. Others haven’t stepped up as hoped.

Essendon’s Jye Caldwell – who’d worn Brownlow medallist Lachie Neale closely all game, and had the better of the duel – probably kicked the sealer when he stormed out of the centre to kick truly with four minutes to go, to secure an 11-point margin. 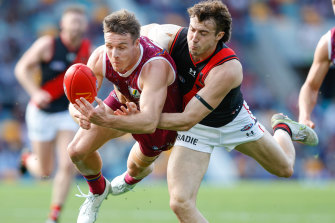 Cam Rayner kept the Lions in it with the reply, but the Lions couldn’t scramble another, and the Bombers deserved their win. Big Peter Wright continued his stellar season, finishing with five goals, three of them in the third quarter.

The Bombers were also well served by Kyle Langford, who kicked four, and the perennial Zach Merrett. The Lions had Hugh McCluggage, and wholehearted efforts from ruckman Oscar McInerney and the returning Mitch Robinson, but it was a long tail after that.

The Lions need to keep the loss in context. They were missing key defender Harris Andrews, plus Callum Ah Chee, Noah Answerth and Keidean Coleman to COVID-19 protocols. Throw in Daniel Rich and captain Dayne Zorko.

In addition, midfielder Jarrod Berry was injured, while Dan McStay was another out under health and safety rules. The result was a side that was forced to draw deeply on its reserve squad, and which often looked to lack system and familiarity.

What was most glaring, though, was how much space the Bombers were given. They trounced the Lions for uncontested ball, 237-165, and more damningly for contested ball, 137-126, with the Lions making up some ground in the last quarter.

That won’t please Lions coach Chris Fagan, no matter who was wearing the jumper. Brisbane had their chances to win the game in the last quarter, missing several shots at goal, but really, it was remarkable they were so close.

Essendon looked like they were going to put the Lions away early in the last quarter, when Merrett found Langford at the teeth of goals for his fourth. But the Lions kept nagging, Charlie Cameron kicking his first on a quiet afternoon.

Another to first-gamer Carter Michael got the crowd involved, but Essendon won a free kick out of the next centre bounce, and Wright took another contested mark for his fifth. In the end, he was the difference between the sides.