Carlton star Sam Walsh has had back surgery and will miss at least the first month of the season in 2023.

The 22-year-old had micro-discectomy procedure in his back, which involves the removal of a bulging disc portion to relieve pressure on a nerve.

The club has already ruled him out for the start of the season and will assess the time of his potential return after the first month.

It is a massive blow for the Blues who were forced to rule Walsh out of the final home and away game in 2022 due to back issues. They hoped he would recover with rest but after consulting specialists decided surgery was necessary. 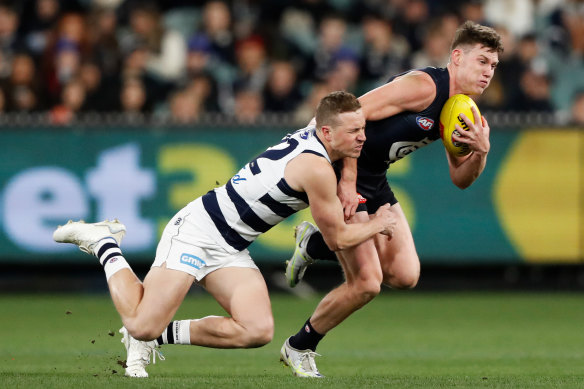 Carlton football manager Brad Lloyd said Walsh was recovering and would begin his rehab in the new year.

“Throughout the last few months our number one priority has been for Sam’s wellbeing in managing this issue, which is why we explored every possible conservative treatment option.

“Following this extensive process, it was clear that given all alternative treatments had not progressed his recovery, surgery was the required option to correct the issue.

“Sam is now recovering after undergoing surgery last night and will commence his rehabilitation in the New Year.

“While Sam’s professionalism and resilience is well-known, we will absolutely give Sam all the time he needs to make a full recovery before he returns to the side during the season.

“Due to the long-term nature of this rehabilitation, it isn’t possible to confirm a set date for his return right now. Once the opening month of the season has been completed though, we expect to be able to provide more clarity on his expected return to play.”

The Blues must make finals in 2023 after narrowly missing out in 2022. The club is investigating their injury management with president Luke Sayers saying they had already made changes in their high-performance area after injuries to several key players.