It’s the secret Gold Coast meeting that doesn’t fit the narrative being peddled by those who are insisting Trent Barrett was surprised by a board meeting on Monday to discuss his future and sacked by football manager Phil Gould.

On the Thursday night before Canterbury played Newcastle in Brisbane to kick off Magic Round, Barrett and his agent, Wayne Beavis, met with Gould and Bulldogs recruitment manager Peter Sharp at Omeros Bros restaurant. I can’t tell you what they ate, but I can tell you what they discussed. Going into that dinner, Barrett was more than aware of the growing pressure. He knew a loss the following night would see the knives out for him.

At the dinner there was a clear message conveyed: don’t celebrate a win too hard – as he did with an outpouring of emotion when they beat the Roosters a fortnight earlier – while a loss was not to be publicly treated as the end of the world. In other words, keep the emotions in check as they had a meeting with the board on Monday to tell them why he was still the man to take the club forward. He would get support from Gould and skipper Josh Jackson, who wanted to speak to the board. Barrett knew that, at the very least, a change to his methods, and possibly the way the team was training, were on the agenda. 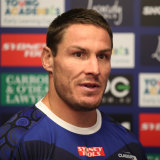 The Bulldogs lost, Barrett was numb at his press conference, he was in tears after the game and abandoned the team review. Gould left a meeting on Saturday morning with Barrett at the Sofitel Hotel concerned not so much about him as a coach, but his mental state. This column broke the news last Sunday that the Canterbury board was losing faith in Barrett and he was in trouble.

When Gould got off air on Sunday night after calling the football for Channel Nine, he got a message from Beavis to say Barrett had quit. Some have claimed he quit when he found out about the board meeting; that he was stunned by the news. However, he already knew about the meeting and its announcement in the media on Sunday afternoon was no surprise for Barrett.

The board sub-committee that was to meet last Monday to discuss several matters, including team performance, had actually met on two previous occasions in the weeks leading up to Barrett’s departure, following the losses to the Broncos and Raiders. The same matters had been discussed at those meetings.

Barrett was aware those meetings had taken place. Gould’s recommendation on both occasions was to be patient and support the coach.

The players were told on Monday that Barrett had quit. Most didn’t flinch. However, Jackson was upset and Jack Hetherington was furious. They also knew they were the group that, ultimately, put Barrett in this situation. And they have been told, in no uncertain terms, they are all on notice. Very few are safe, contract or no contract, and that includes the big names.

Barrett too needs to accept his share of the blame for the club’s dismal start to the season. His recruitment was desperate, his coaching was too advanced for the team, and he didn’t change. It has been his biggest fault as a coach; an inability to listen and learn from past mistakes. That stubborn approach saw him lose the faith of powerbrokers at Manly when he was coach and it came back to bite him at the Bulldogs.

It’s not all about bad news being a sports columnist. Here’s one reason why this job is fun and rewarding: telling the story of Lachlan Miller, the Sharks’ Olympic rugby sevens player, who makes his top-grade debut on Sunday.

During the Tokyo Olympics, where Miller was representing his country, he received a letter from another Lachlan, school student Lachlan Hobbs. His class wrote letters to Olympians as part of a school project. Young Lachlan went through the entire Olympic team list. He focused on rugby sevens because he loves his footy. He went through the sevens team, found Miller and picked him because they have the same name. So, he sent him a letter and watched every sevens match at the Games.

A few weeks after the Olympics, he received a parcel at his school. Miller also wrote him a nice note: “The letter you wrote meant so much to me and really helped me while I was in Tokyo. Thank you so much for your kind words and support since returning from the Olympics. I have pursued a career in the NRL and have signed with the Cronulla Sharks. Hopefully, we can at least be your second favourite team (behind the Roosters) and we can get you to a game. Your letter meant so much to me. I had to do something in return. So as a small token ofmy appreciation, please enjoy this sighed Australia sevens jersey.”

The jersey is one of Lachlan’s prized possessions. Since he revealed he had signed with the Sharks, each week Lachlan has waited for the team list to come out, hoping Miller would make the top grade. To say young Hobbs was delighted with his selection this week is an understatement.

Spotted deep in conversation at Pilgrims cafe in Bronte during the week were Roosters coach Trent Robinson and Australian cricket captain Pat Cummins. They could not have been discussing football, as Cummins’ Panthers played Robbo’s Roosters on Saturday night. Robinson is an excellent leader and would be a great sounding board for Cummins. The pair live close to each other.

A trip up the M1 to Newcastle for Channel Nine legend Ken Sutcliffe and his mate Peter Overton last weekend delivered a $100,000 windfall for RUN DIPG, a charity for patients and families impacted by the deadliest form of childhood cancer – the brain stem cancer, diffuse intrinsic pontine glioma. One of Sutcliffe’s mates lost his grand-daughter, Josie, to the disease, so he and Pete put on their double act, telling stories about Kerry Packer, Wide World of Sports and Pete’s decade with 60 Minutes.

If it was almost any other player in the NRL than serial offender Paul Vaughan the media may have let his sledge slide. Believe me, in more than three decades covering the game, I’ve had worse. Even at Belmore. Such as when the players enjoyed pouring a bucket of ice water on me from a window.

Or when a coach, who I reported was about to be sacked, dropped a shoulder into me as I walked up the stairs at Parramatta Stadium. He was sacked the following week.

Or the drug dealer with links to players, who spat in my face and took a swing at me because I exposed him. I eventually took him to court. The list goes on. It’s not always an easy or fun job.

Vaughan thinks the media are “the worst people”. He vented his anger to a Fox Sports cameraman, who was filming outside Belmore on Monday after Trent Barrett’s departure from the Bulldogs. “Do you have to?” he said. “Do you have to? You’re the worst kind of people, eh?” He then got in his car with his window down and uttered the same line to myself and Fatima Kdouh from News Corp.

Vaughan is angry with me because I first revealed he broke the NRL’s COVID-19 rules in 2020 by going to his local cafe, not using his name to sign in and sitting in the cafe while all of his mates were stuck inside not doing things they wanted to do. I also revealed he broke state government laws by having a barbecue for his teammates at his house when his area was considered a hot spot.

The Dragons didn’t win a match after he did that. The club had told him and his teammates they were not to have such a gathering. It was the act of a person who doesn’t think the rules apply to him. He cost himself hundreds of thousands of dollars and was lucky the Bulldogs were desperate and threw him a $400,000 lifeline.

He has been asking for that and more from Canterbury and other clubs, but has had little interest.
Any NRL club that signs him will get a solid player who has seen his best days, but they won’t get a solid citizen. And to some, thankfully, that’s still important.

The exodus of key staff from the NRL continues and, worryingly, it is decimating the integrity unit.
The latest departure will be at the end of the season when general counsel Joe Collins, who heads up the integrity unit, leaves. Collins has been at the NRL for the best part of a decade, but has rarely been seen or heard publicly. Collins is renowned as a hard-working, meticulous operator, who thinks nothing of putting in an 18-hour day during major investigations.

He and Karyn Murphy – the chief investigator, who has also announced her departure from the NRL – made a formidable team. They ruthlessly pursued the salary-cap breaches by Parramatta, Manly and Cronulla.
No matter how you look at it, the integrity unit, which has served the game so well, is now in tatters. It is going to require the recruitment of high-quality replacements to protect the game going forward.