Another match given blockbuster billing, another lop-sided victory for the premiers.

Just as they were expected to be pushed to the limits by Melbourne and the Sydney Roosters in the past fortnight, the Panthers whacked the high-flying North Queensland Cowboys on Friday evening, coasting to a 22-0 victory.

Those three heavyweight clashes have ended in an aggregate scoreline of 86-18 in Penrith’s favour.

True, Penrith beat Melbourne without Jahrome Hughes and Ryan Papenhuyzen, then met the Roosters missing Victory Radley and the Cowboys with Jason Taumalolo sidelined with injury.

An even bigger party-pooper would point out that Jarome Luai faces a nervous wait after collecting Scott Drinkwater with his right shoulder late in the game. 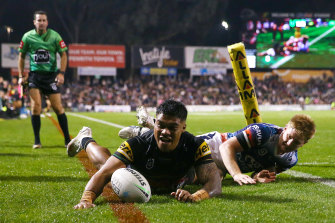 Brian To’o dives over for a try in the first half at BlueBet Stadium on Friday night.Credit:Getty Images

The only disappointment about Penrith’s latest win was the 6pm timeslot, which still featured a healthy crowd of 17,125, but most of them nowhere to be seen when club legend Royce Simmons walked into BlueBet Stadium at the end of his 11-day march to raise funds and awareness for dementia research.

All eyes will now be on how many Panthers are given the nod by NSW Origin coach Brad Fittler.

Nathan Cleary, Isaah Yeo, Luai, Brian To’o and debutant Stephen Crichton should all be there. Liam Martin and Api Koroisau are also skinny odds to make the final 22-man squad.

The Panthers have already admitted they could have handled the Origin period better last year. It explains why they snapped up back-up playmaker Sean O’Sullivan over the summer. And why they have rested up to half a dozen players from Sunday’s NSW Cup game with the NRL clash against Canterbury to fall five days later.

The Origin hopefuls pulled through the game without any injury concerns.

Cleary came up with a 40/20, a try assist, and a few words for referee Ashley Klein when he failed to penalise big Jordan McLean for taking him late after he had kicked.

“He’s tackled my legs, it was dangerous,” a fired-up Cleary told Klein, to which the referee responded: “I didn’t think he could pull out of the tackle.”

The right-edge combination of To’o and Crichton combined beautifully to deny Tom Dearden a try late in the first half.

Yeo stormed over for the first try courtesy of a well-weighted pass from Koroisau.

And Luai’s floating pass sent Taylan May on his way for as try in the second half.

The Cowboys spread the ball early and made metres through Valentine Holmes. Holmes made a couple of decent breaks and reminded fans there are few players who can move as gracefully as he does when it full flight.

But Penrith were over after three minutes, doubled their lead midway through the first half, were held up three times across the line and had Izack Tago put his arm into touch when he thought he had a four-pointer.

The sheer weight of possession and field position was always going to make it difficult for the Cowboys to mount a fightback.

Penrith enjoyed nearly 65 per cent of possession in the first half and were tackled inside the 20m 33 times, compared to the Cowboys’ eight times.

Even when they had their moments in the second half, the Cowboys coughed up the ball and continually invited the home side back into the game. They deserved praise for having a crack.

Viliame Kikau produced plenty of big shots, including one on Jeremiah Nanai that was placed on report, the same time Luai appeared to collect Drinkwater.