The AFL told umpires last week to soften their definition of what constitutes dissent from players, and no longer to penalise players for a single “arms out” gesture.

But at the meeting, umpires were also told that this change would not be communicated to players, clubs or fans.

Wary of being seen to have softened its stance on dissent, the AFL said it had recalibrated dissent and fine-tuned permissible behaviour to reach a common-sense level after the strict early-season crackdown. 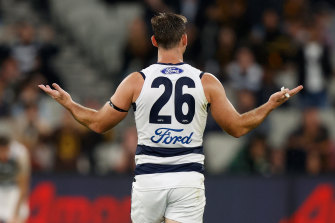 Tom Hawkins holds his arms out after giving away a 50-metre penalty.Credit:AFL Photos

A range of incidents in games had been considered as missed free kicks or 50-metre penalties by the umpires in their weekly reviews. But recently the football operations department had advised that these instances should not have been graded as missed infringements.

According to sources familiar with the discussions, league bosses told the umpires they felt there should be a reasonable difference between a player’s disappointment and dissent or a demonstrative complaint.

“The players have continued to adapt and are adapting well, as are the umpires,” an AFL spokesman said on Monday night.

“It is having the desired effect on reducing umpire dissent on-field and having a positive impact at the junior level we wanted. Everyone is playing their part as the season progresses.”

Confusion came about early in the season after one umpire paid a 50-metre penalty for dissent against a player who had put his arms out and was heard telling the player “arms out” is immediate dissent.

It was accepted from that point by players and clubs that “arms out” would be an automatic penalty. They now accept this should not be a mandatory penalty and it has not been paid as such in recent weeks.

AFL sources say the change to dissent application was no different to any other rule where there is invariably an over-correction before players and umpires adjust.

The AFL is comfortable that player behaviour has significantly changed since the dissent crackdown.

The AFL did not contact all clubs about this shift.

AFL sources said, however, the umpire bosses reached out to multiple clubs each week about specific players they felt were pushing the boundaries.