It’s a clash between two bottom-four sides at Adelaide Oval, and the Crows will be aiming to snap their five-game losing streak against the Eagles.

West Coast have the wood over Adelaide, winning seven of their last eight encounters, including the last five, but this year’s West Coast team is a very different proposition.

The Eagles would be content with a loss by under 50 points at this stage.

With just one win to their credit, the bottom-placed Eagles have been horrible on an historic scale this season, having lost their past seven games by a whopping average of 80 points.

They’re trying to avoid eight losses in a row for the first time since 2001.

Their percentage has plummeted to a jaw-dropping 49.7. To put that into context, Fitzroy in their final year in 1996 finished with a percentage of 49.5.

The Roy Boys’ average losing margin that year was 72 points, West Coast’s this year is 66 points.

Two of the Eagles’ last three games at Optus Stadium have resulted in losses by over 100 points. Prior to this season, they had lost just one game at home by a triple-figure margin in 35 years.

Meanwhile, the Crows have only won four of their last 15 games at Adelaide Oval, and the Eagles actually have a very good record against Adelaide at the venue (4-2). But again, the 2022 version of West Coast is a shadow of the West Coast sides from the past few seasons. 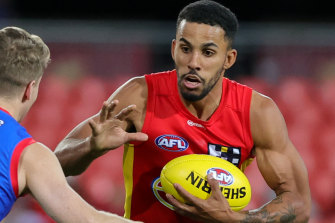 Hello everyone and welcome to our slightly downsized AFL Saturday mega blog for Round 12.

This is the first of the bye weekends, so with the reduced number of games, we’re down to three games today instead of the usual five.

But there’ll be no shortage of action as the Crows host West Coast at Adelaide Oval in the early game, Gold Coast tackle North Melbourne in Darwin in the twilight game, and then the best is saved for last as Melbourne and Sydney do battle in a top-eight showdown at the MCG in the night game.

So sit back, relax and enjoy all the rolling action as we bring it to you live over the next 10 hours. 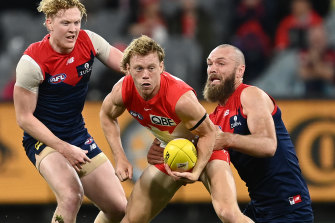