“The ultimate goal in rugby league is to win a competition,” Addo-Carr said.

“Obviously Canterbury has been struggling the last couple of years. Every club goes through that stage. It’s good times ahead and it will be mad to hopefully win a premiership for all the locals who are proud about the club.

“I see Bulldogs fans every day, to put a smile on their faces and bring back the glory days for them, it would be mad.

“Why can’t we be a top-four team? If you’re willing to work hard, why can’t we do that?”

Addo-Carr has left the benchmark club, Melbourne, to join the wooden spooners. The reasons for doing so are many. The opportunity to be closer to family was ultimately the strongest, coupled with the belief Canterbury is about to re-emerge after some of the club’s most challenging seasons.

The responsibility for turning around the Bulldogs’ fortunes won’t rest solely on his shoulders. Matt Burton, Matt Dufty, Paul Vaughan, Tevita Pangai jnr, Brent Naden and Braidon Burns are other stars hoping their careers can kick on under coach Trent Barrett and footy supremo Phil Gould.

However, none cut a more recognisable figure than “The Fox”, who was mobbed when he sat down with the Herald at Jobel’s cafe during a toy drive for Hirschsprung’s disease, a condition that prevents bowel movements in newborns.

“It’s been crazy bra, it’s so good to be back home in Sydney,” he said.

“You appreciate where you are from more when you move away. I’ve had a hell of a ride down in Melbourne, but it was time to come home. 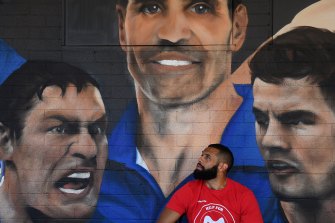 “The whole reason I left Melbourne was to step out of my comfort zone. Why not do it now? I’ve come to a team that’s been struggling the last couple of years to try to help a proud club bring back its glory days.

“I’m only a winger, but I know I can help the teammates around me.”

For now, Addo-Carr remains just that, a winger. The 26-year-old hasn’t yet spoken to Barrett about his role for next season, which is unlikely to result in a shift to fullback given Dufty’s presence. However, he is open to either role.

“I played fullback all through the juniors, so I thought I could give it a crack,” he said.

“It is what it is, I will play in the front row if I have to. They signed Matt Dufty, so that’s probably a signal he will play fullback.”

There are few more prolific tryscorers in the modern game. The former Tigers flanker has notched 102 tries in 127 games, almost halfway to the all-time mark of 212 set by Ken Irvine at the halfway point of his career. Of the modern brigade, only South Sydney’s Alex Johnston, with 166 tries, is closer to breaking the record.

It remains to be seen whether Addo-Carr can maintain his current strike rate and get close to the record now that he’s left the Storm.

“It’s one of those things, you don’t think about that stuff too much,” he said.

“I love scoring tries, don’t get me wrong, but I haven’t thought about breaking the record. If it happens, it happens.

“Probably Alex Johnston will get it soon, he’s killing it.”

Addo-Carr left Sydney as a fringe first-grader. He returns as the world’s best winger, a premiership winner and a man now spoken of as a candidate for a leadership role at the ‘family club’.

“I’ve changed heaps bra, I’ve matured way more than I expected, to be honest,” he said.

“I went down to Melbourne for an opportunity and took it with both hands. It definitely turned me into the player I’ve always dreamed to be.

“I wouldn’t change it for the world, it’s been a hell of a ride. It’s good to be back in Sydney. You appreciate it when you move away, it’s the best place ever.

“If they want me in the leadership group, then sweet. I get on with everyone, It comes naturally for me.”