Saint-Etienne: The Wallabies will unleash a flash new halves pairing against Scotland, with coach Dave Rennie pulling his first surprise of the tour by starting Tate McDermott at halfback alongside experienced five-eighth Bernard Foley in what will double as an early World Cup audition.

McDermott is Australia’s livewire No.9 with pace to burn and a “point of difference” who hasn’t started a Test for the Wallabies this year but assures he won’t let the chance slip.

“It came as a bit of a surprise,” McDermott told the Herald from the team’s base in France ahead of an opening clash with Scotland on Saturday (Sunday 3.30am AEDT).

“We’ve got five important games coming up and it’s my chance to make an imprint on this side. The coaches were pretty straight with me. I have been training really well, so [not playing] was nothing around my form, but the other boys suited the mould for the Rugby Championship a bit better.

“My job is to inject that little bit of speed and tempo and drive those standards in and around ruck time.”

Rennie explained he would rotate his halfbacks on the five-Test tour and that wet conditions set to greet the team in Edinburgh didn’t influence his thinking around getting McDermott, who loves to run the ball, more minutes. 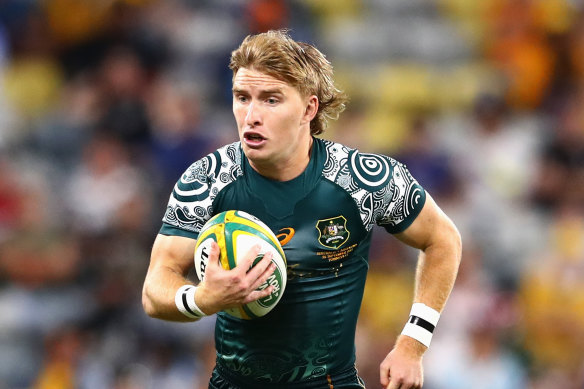 Foley, who sunk Scottish hearts in the 2015 World Cup quarter-final with a 80th minute penalty, gets his third consecutive start at No.10.

McDermott and Foley have never played together, let alone started at international level, but an auspicious showing at Murrayfield could force Rennie to stick with the Queensland-NSW halves combination throughout the tour.

The seeds of a World Cup partnership may have been sewn in Saint-Etienne this week, the venue of two Australian matches at the World Cup next year.

“It’s going to be really exciting linking up with him,” McDermott said. “All I have to do is give him early ball and we’ll be right. I got a taste of Quade [Cooper] last year and Bernie is someone I’ve grown up watching. His effect on this team has been massive.”

Rennie has made a number of changes to the Wallabies side that capitulated in a 40-14 loss against the All Blacks almost five weeks ago.

As reported on Thursday, Michael Hooper returns to Australia’s starting XV at No.7 for the first time in 105 days after his break from the game.

Hooper’s return means Pete Samu is the unlucky man, despite a fabulous Rugby Championship campaign. Samu will come off the bench, with Jed Holloway (No.6) and Rob Valetini (No.8) rounding out a balanced back row.

“We reckon he’s ready to go … he’s jumping out of his skin,” said Rennie of Hooper. “He’s in a really good space. He trained well this week and is excited to get back into it.

“Pistol [Samu] is phenomenal off the bench. He was excellent in Melbourne [but] he fell off a fair few tackles in Auckland. Jed will call the lineout, so it gives us another string to the bow there. Pete can come on and cover anywhere. His impact on games with 30 to go has been a real point of difference.”

Elsewhere, Australia have gone with an inexperienced second row in Nick Frost and Cadeyrn Neville – they have eight Test caps between them – while Queensland utility Jock Campbell is in line to debut off the bench despite a mishap in the gym this week. 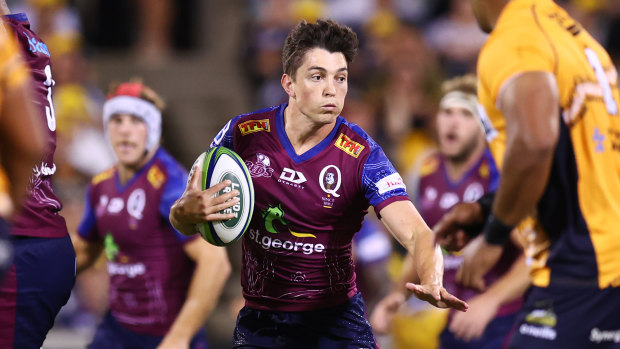 Reds back Jock Campbell has been named on Australia’s bench. Credit:Getty

“He [was told of the] news wearing a Game Ready on his ankle because he tripped over in the bloody gym and tweaked his ankle a bit,” Rennie said. “He didn’t train Tuesday but he’s done everything he possibly can to get that right.

“It’s a great story. He wasn’t part of an academy system, he’s had people telling him he’s not quick enough or big enough and he’s on the verge of representing his country. He’s had an outstanding year.”

Tom Banks slots into fullback, following his recovery from a broken arm, with Andrew Kellaway and Tom Wright named on the wings.

The Wallabies have lost their last three Tests to Scotland, stretching back to 2017.

“I got a little taste of Murrayfield last year and the anthem is sensational. 53,000 of them belt it out,” McDermott said. “The Scots are very hard to beat there … they’re a different beast. We’ve got to make sure we’re on from that first whistle.”

Should the Wallabies win, don’t expect to see McDermott celebrating with a beer in hand. A little-known fact is that the Queenslander is one of the few players in the touring party who have no interest in alcohol.

“It’s just been a personal decision since I was young,” McDermott said. “Growing up on the Sunshine Coast … you don’t find too many of them. At the start I didn’t enjoy the taste and from there I haven’t really felt the need to. I like to think I’m pretty outgoing as it is.”