Lewis Hamilton was forced to take evasive maneuvres in order to avoid hitting Charles Leclerc at the British Grand Prix earlier this month. The Mercedes driver could be heard admitting as much to his Formula 1 rival when they reconvened in Spielberg a few days later.

Hamilton and Leclerc were battling for third place as they neared the finish line at Silverstone, by which point six drivers had already retired from the race. The pair were on the 48th of 52 laps when Ferrari ace Leclerc reclaimed position at Copse Corner, stealing in front of Hamilton from the outside at around 300 kilometres per hour.

The switch proved temporary as Hamilton eventually pipped the Monegasque to a place on the podium in his home grand prix. With no hard feelings between the two, the Silver Arrows star told Leclerc he had his safety in mind at the height of their struggle.

“I was like, ‘f***, I don’t want to just clip you and send you off,’” the seven-time world champion can be heard telling his peer on the latest episode of Ferrari’s All Access YouTube series.

One could forgive Hamilton for feeling apprehensive, particularly at such a dangerous portion of the Silverstone circuit. It was at Copse that Hamilton collided with nemesis Max Verstappen during last year’s British Grand Prix, which resulted in the Red Bull driver slamming into the tyre barrier and out of the race.

Hamilton, 37, was ultimately deemed responsible by stewards and given a 10-second penalty, though it didn’t prevent him from winning the race. Comparing the two incidents, one could easily argue Hamilton afforded Leclerc considerably more space on his outside than he granted Verstappen 12 months prior. 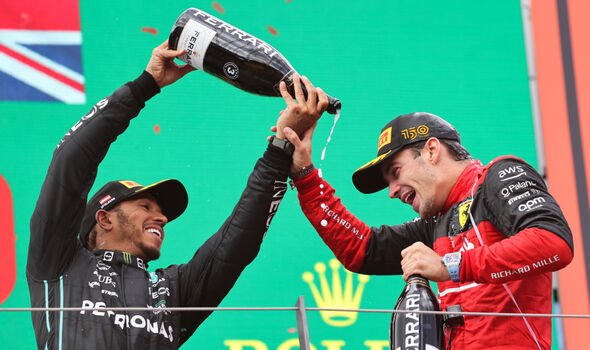 Speaking to reporters following the British GP, Hamilton described Leclerc as “such a sensible driver” and appeared to aim a dig at Verstappen. “Definitely different to what I experienced last year,” he added. “Copse, for example – we [him and Leclerc] got through there no problem.”

The Brit is enjoying his best stretch of form so far this year and has secured third-place finishes in the last three races. Leclerc, meanwhile, has climbed back to second after winning Sunday’s Austrian Grand Prix and will look to close the 38-point gap to leader Verstappen when the season resumes in France on July 24.