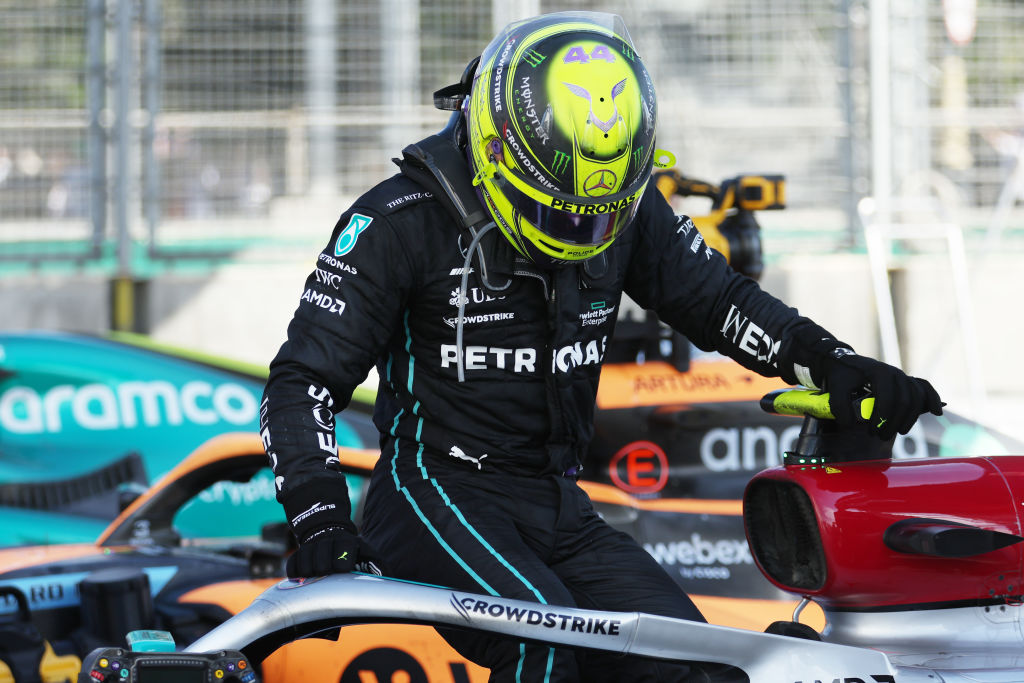 Lewis Hamilton has described the physical agony he suffered during the Azerbaijan Grand Prix as Mercedes’ ‘porpoising’ problems continue.

Hamilton was voted Driver of the Day after finishing fourth in Sunday’s race that was won by Red Bull’s Max Verstappen after both Ferraris retired through mechanical issues.

Throughout the season the Mercedes W13 has struggled with ‘porpoising’ where the car bounces uncontrollably, something that has hindered performance and caused serious discomfort to the drivers.

The issue seemed even worse than before at the Baku Street Circuit, with Hamilton admitting during the race that his back was in excruciating pain, and at the end of the race the 37-year-old could be seen struggling to get out of his car.

Asked how he managed to battle through the pain, Hamilton told Sky Sports: ‘Just biting down on my teeth and just the adrenaline.

‘I can’t express the pain that you experience particularly on the straight here and at the end you’re just praying for it to end.

‘But we’re in such a good position still, third and fourth is a great result for the team. They did a really good job with the strategy and once we fix this bouncing we’ll be right there in the race.

‘We’re losing at least a second because of the bouncing for sure. I’ll be at the factory tomorrow; we’ve got to have some good discussions and keep pushing.’

Mercedes aren’t alone in suffering from ‘porpoising’ with McLaren’s Daniel Ricciardo also highlighting the issue over the weekend, and there have been calls for regulation changes that will allow teams to more easily fix the problem.

Hamilton’s teammate George Russell who finished third added his concerns, saying: ‘It definitely wasn’t pleasant. This was one of the worst cases of the season.

‘The straight was so bumpy out there I don’t really know what was going on. Obviously, it’s like a seven-lane motorway so that probably didn’t help keep things nice and smooth.

‘No one is saying this to try and get an advantage. The Ferrari drivers and even Max was saying how tough it is. It’s not great for anyone and something will happen there’s no doubt about it.’

With the next race in Canada just a week away however, it seems unlikely that there will be much of a turnaround before then, but Russell remains confident that once it’s solved, he and Hamilton can challenge the frontrunners.

‘I know how capable and great Lewis is and I know once we’ve got the car, he’s going to be a whole new beast,’ the 24-year-old added.

‘We’re so fixated on fixing these issues we’ve not been able to work on trying to maximise a race weekend and focusing on our driving but once we get a good car underneath us the true Lewis Hamilton will be out there and fighting strong.’