The Australian has been consistently out-performed by teammate Lando Norris this season and there are signs the team is getting increasingly frustrated. Norris qualified fifth despite still not feeling 100 per cent after a bout of tonsillitis. 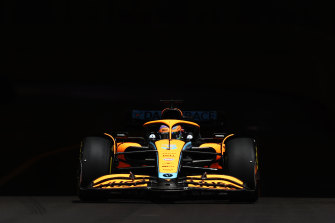 “I just couldn’t build and get the grip and find that big step… that’s still the struggle,” said Ricciardo.

“Unfortunately another not great quali for Monaco.”

“Daniel was just a couple of years ago a top three or four driver in F1, and it’s so difficult to explain what happened,” said the German. “I really feel for him because this is a painful situation.”

Leclerc was already atop the leaderboard when a crash by Sergio Perez stopped the qualifying session with about 30 seconds remaining. Leclerc said had Perez not crashed, his final flying lap would have been even better.

“I was about four tenths quicker and it was a really good lap,” Leclerc said. “But what happened to ‘Checo’ happened to me last year, so no frustration.”

Perez spun his Red Bull on his own final qualifying lap and was blocking the course, and Carlos Sainz jnr saw him too late to avoid hitting Perez.

Perez said “I could feel the rear tire was not gripping,” and the damage “looks bad from the rear”. He expected Red Bull to repair the car in time for Sunday’s race.

Sainz said he saw the yellow flag for Perez, but wasn’t aware of where Perez’s car was located as he came upon the Red Bull.

“I was coming from a blind corner,” he said. “It would have been a pretty good save.”

Despite the contact with Perez, Sainz qualified second as Ferrari locked out the front row for Sunday’s race. 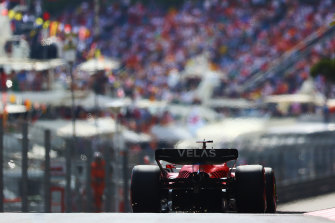 “I think we are in a great position to score points,” Sainz said.

For Leclerc, he must actually finish a race on his home circuit.

He won the pole a year ago but was unable to start the race because of damage to his Ferrari. He’s never finished an F1 race in Monaco.

“Hopefully we can have a clean race,” said Leclerc, who was fastest in all three practice sessions. He noted the forecast called for rain on Sunday, but he was decent in wet conditions at Imola.

“City tracks are very tricky. In the wet I’m sure Monaco is even tougher,” said Leclerc.

Leclerc, winner of two of the first three races of this F1 season, lost the championship lead to Verstappen in Spain last week when Verstappen won his third consecutive race.

Verstappen will start fourth on Sunday alongside Perez, who was third-fastest before his late spin in qualifying.

George Russell qualified sixth for Mercedes. Russell’s teammate, seven-time champion Lewis Hamilton, qualified eighth and was unable to improve his position because of the red flag brought out by Perez’s spin.

“I feel sorry for Carlos and the rest of the guys but that’s Monaco,” Perez said.

As the sun splashed the circuit, stars were rushing to the circuit in time for qualifying. F1’s iconic race is as much about bling and glamour as the racing itself, and celebrities flock here every year.

It’s close to Cannes, where the film festival is held, and over the years Star Wars creator George Lucas has been a regular. Seen in Monaco ahead of Sunday’s race have been: actor Ryan Gosling, NBA scoring great LeBron James, singer Ricky Martin and UFC star fighter Conor McGregor.

The racing, however, is not all that compelling and most of the action happens in qualifying. Come race day, passing is almost impossible on the narrow 3.34-kilometre street circuit.

And with cities across the globe clamouring for a Formula 1 race and willing to pay astronomical fees to land a grand prix, the marquee Monaco event is in jeopardy.

FF1 is as much part of the tiny principality’s image as Grace Kelly and Monaco’s famed casino. But while the promoters of Monaco pay F1 a sanctioning fee, it’s believed to be nominal and around $US15 million annually. Other cities pay closer to $US60 million per year. F1 is in the final year of its contract with the Monaco Grand Prix, and if financial negotiations don’t improve, the circuit could fall from the 2023 calendar.

“I think Formula 1 is now of a size and scope that it’s bigger than any one team, bigger than any one driver and bigger than any one race. I think, of course, none of us would want to see Monaco go but also understand as commercial rights holder, they need to have an arrangement that’s more consistent with the other venues given the demand of tracks that want to host grands prix.”

Drivers are not in favour of a move away from Monaco.

“I think it would be a bad move. F1 without Monaco for me is not F1,” said Leclerc, a Monaco native. “F1 has historic tracks like Silverstone, like Monza, and I think they should stay.”

“I think if they would propose the plans nowadays with how the track layout is, probably it would not be on the calendar,” said Verstappen. “But I think because of the historic value, it belongs on the calendar.