Motor sport fans have been deprived of F1 action in Australia since early 2019, but that didn’t deter their interest in what was this year a long-running and drama packed season to the end.

WORD(S) OF THE YEAR: Safety car
Never has the deployment of the safety car in any motor race been as controversial as that made in late December when Formula One’s Australian race director Michael Masi allowed five lapped cars to “unlap” themselves while in the procession behind race leader Lewis Hamilton on the penultimate lap of the Abu Dhabi Grand Prix.

The call – hotly contested and protested at the time – allowed Max Verstappen to close the gap behind Hamilton, who would have won the world title had he stayed in front.

From the resultant re-start, with just a lap to go, the Dutchman, on fresher tyres, had the pace and grip to reel in the British veteran and overtake on track to land the spoils and with it the F1 championship. Mercedes thought long and hard about court action to overturn the result, but finally decided against. 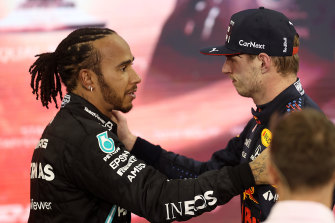 THREE WINNERS: Max Verstappen, Fabio Quartararo, Oscar Piastri
Controversy marked Verstappen’s ascension to the top table most of the way, but no one can deny that he is a generational talent who can become the benchmark for years to come. He is fast, ruthless and charismatic, and is backed by Red Bull, who know how to win.

Quartararo deserves accolades for winning his first Moto GP championship with three rounds to spare, in the process becoming the first Frenchman to claim the title, breaking a run of Spanish dominance.

Piastri is a record-breaker and one of the brightest talents on the fringes of the F1 world. He became the first driver to win Formula Renault, Formula 3 and Formula 2 in successive seasons and has now landed a test driver role with the Alpine F1 team. If given the chance on the biggest stage, he could be a future star. 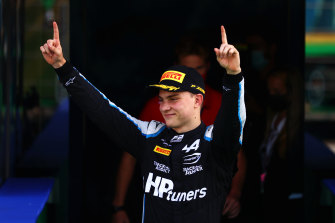 THREE LOSERS / DISAPPOINTMENTS
Hamilton endured his defeat in the desert with grace and dignity, even congratulating Verstappen. But he and his Mercedes team are seething at how a record-breaking eighth championship was snatched from his grasp in controversial circumstances. Following Hamilton’s strong disappointment from the events in Abu Dhabi, there has been considerable conjecture that the Briton might be setting himself for retirement.

Joan Mir went into the new MotoGP season as the defending champion but failed to win a single race as Quarteraro dominated the division. The Spaniard will need to do better.

It’s hard to describe Daniel Ricciardo, who won a Grand Prix this year, as a loser. In the scheme of things he is very much a winner, but it has been a disappointing year for Australia’s only F1 driver. He went into the season with McLaren hopeful, but struggled to adapt his driving style to the car and despite a great win at Monza trailed his youthful teammate, Lando Norris, more often than not. 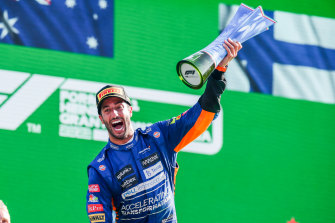 CONTROVERSY CORNERED
There is only one real contender here and it has to be the hotly disputed call in the penultimate lap of the final GP of the season, which allowed Verstappen to get past Hamilton for the title. Did Australian official Masi stuff up? Was it a contrived decision to ensure that the race finished on the track with cars racing, rather than under a safety car? Was it done to ensure TV audiences stayed glued to the show, or to get clicks and generate media interest? All sorts of theories abounded afterwards. 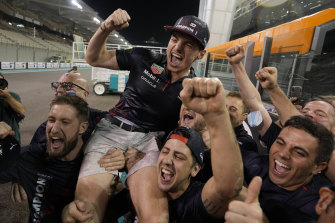 Max Verstappen celebrated long into the night after winning the drivers’ championship.Credit:AP

MAN OF THE YEAR: Max Verstappen
Love him or loathe him (the Dutch take the former view, plenty of Brits now can’t), the young world champion is a singular figure who was rarely far from the headlines all year, as he waged a fantastic battle with Hamilton throughout the season for supremacy. Yes, he is impetuous, yes, he is aggressive and pushes the envelope, sometimes seeming to overstep the bounds of racing decency. But he is fast, exciting and compelling, and an F1 hero for the future.

WOMAN OF THE YEAR: Molly Taylor
Australian Taylor is perhaps the least well-known prominent driver in the country. She competes in rallies, and therefore most of her best work is done overseas and escapes local attention. But she has been right at the forefront of the Extreme E series for Team Rosberg. That is an off-road competition that only uses electric vehicles, SUVs, to race in extremely remote parts of the world. Taylor also competed in two rounds of this year’s World Rally Championship.

VIRAL MOMENTS OF THE YEAR
1. The moment that Verstappen on fresh tyres overtook race leader Hamilton to wrap up the F1 world title. Hamilton could only fume as his rival sped away.

2. In terms of visual impact, the collision between the two title contenders at Monza, Italy, in September was hard to forget. Fighting for position at the first chicane on lap 27, midway through the race, the two drivers bumped wheels, lifting Verstappen’s Red Bull vehicle up into the air and bringing it down on top of Hamilton’s head as both cars slid into the gravel trap. Fortunately, Hamilton’s roll hoop and halo device bore the brunt of the weight, but it left him shaken, his Mercedes badly damaged and both men nursing grievances. 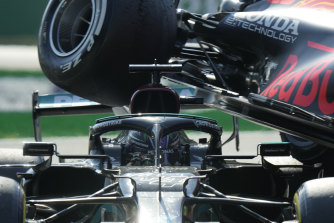 3. Piastri taking the chequered flag in Abu Dhabi to win the F2 title was the culmination of 15 years of work, which began when he was a six-year-old racing toy cars.

4. The crowds that turned out to cheer and farewell legend Valentino Rossi as the seven-time MotoGP world champion made his final lap of the globe’s race circuits in an emotional retirement season. The Italian, nicknamed ‘The Doctor’, was truly one of a kind.

QUOTE OF THE YEAR
“Man this is getting manipulated, man!” – Hamilton expresses his incredulity at the decision to allow Verstappen to close right up on his tail before the restart in the closing stages of the Abu Dhabi Grand Prix.

Hamilton and Verstappen come out slugging right from the start of the new season as the Briton looks to prove that he was denied a world title through injustice. Piastri dazzles in testing for Alpine and gets a mid-season call up to fill in as an F1 driver after a team sacks one of its regulars. Ricciardo gets to grips with the McLaren and is regularly running near the front of the grid. MotoGP proves, once again, to be the most exciting form of motor sport with multiple passing and thrills and spills.