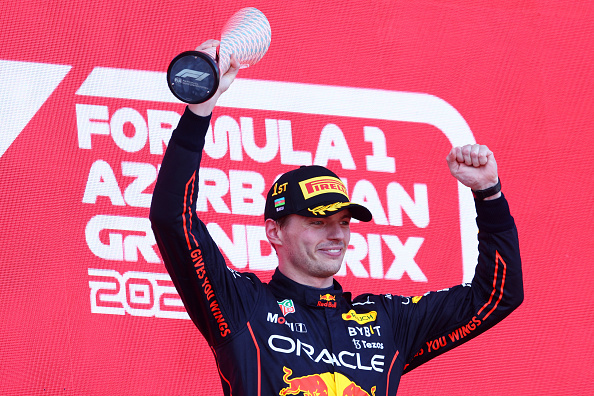 Max Verstappen has praised the quality of his car after he extended his lead of the championship as Red Bull secured a 1-2 finish at Sunday’s Azerbaijan Grand Prix.

The Dutchman started the race in third with teammate Sergio Perez taking the lead off Charles Leclerc at the first corner, before the Ferrari man pitted early to set up an intriguing tactical battle.

However, less than halfway into the race Leclerc retired with power unit problems, allowing Verstappen to cruise to victory after passing Perez without any opposition from the Mexican.

Verstappen ought to have won at the Baku City Circuit last season, but a tyre puncture saw him crash out with just a few laps to go, so the 24-year-old was pleased to have got the job done this time round.

‘You can never make up what you lost last year but I think today we had incredible pace in the car we could really look after the tyres,’ Verstappen said post-race.

‘A tiny bit lucky with the retirement but I think nevertheless our car was really quick today so I think I could have closed that gap and then of course you have a race on your hands.

‘But overall, I’m really happy with the balance of the car today. To end with a Red Bull 1-2 today is a really good result for the team.

‘Every weekend is a bit different. You really have to be precise, be focused on the little things to do with race management, so it can swing around for every race weekend.’

Verstappen is now 21 points ahead of Perez in the drivers’ standings with Leclerc a further 13 behind, while Red Bull are a whopping 80 points ahead of Ferrari in the constructors’ championship.

Somewhat controversially, Perez was instructed by Red Bull to not fight Verstappen for the lead, even after the threat of the Ferraris had gone, echoing a similar instruction the Mexican was given at the Spanish Grand Prix.

But Perez insisted that he was okay with the decision taken, saying: ‘I think it was the right call made by the team because at the time Max was a bit further ahead [pace-wise].

‘At this place anything can happen so at the end of the day we managed to do a 1-2 so that’s a great team result.’