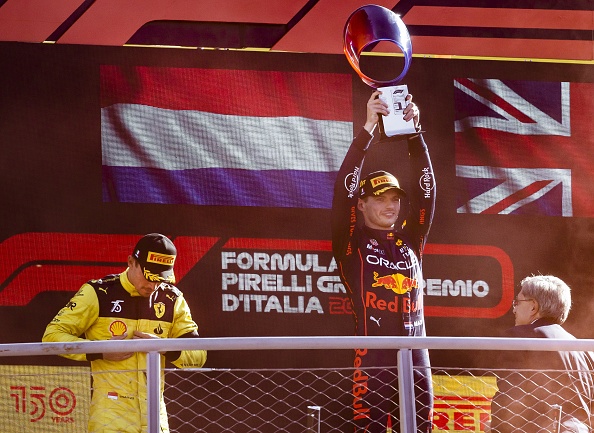 Local supporters in Monza were outraged when the final five laps had to be completed behind the Safety Car, following Daniel Ricciardo’s late crash.

They had been hoping to see Ferrari emerge victorious at its home race but Dutchman Verstappen looked on course to win despite the Safety Car incident.

The current world champion climbed from seventh to second after the opening five laps and was clearly faster than pole-sitter Charles Leclerc, who settled for second, while Mercedes’ British driver George Russell clinched third.

Fans booed Verstappen as he crossed the line – in what was his fifth successive win – and the 24-year-old addressed the Safety Car incident after the race, admitting it was ‘unfortunate’.

‘We had a great race,’ Verstappen said. ‘On every compound we were good. Unfortunately we didn’t get a restart at the end but overall we had a really good day.’

Red Bull’s team principle Christian Horner says he would have preferred Max Verstappen to win on the track rather than behind a safety car. pic.twitter.com/Wt3jn6L354

‘It’s something we’ve talked about for many many years, that they should finish racing.

‘There was enough time to get that race going. I think they picked up the wrong cars, picked up George Russell.

‘We had the faster car, we would have liked to win the race on the track, not behind the Safety Car. We share the disappointment of all the fans, because it took away a grandstand finish.

‘It goes against the principles of what we’ve discussed previously. The biggest losers were the fans. We need to look quickly to address that.

‘I think they had more than enough time to get going.  We need to go through details, but for me there was enough time, we had a car that wasn’t in a barrier, it was just by the side of the track.’