British Grand Prix: A preview lap of the race track

Lewis Hamilton stole Lando Norris’s hat in front of fans in a comical moment between the pair just an hour before the British Grand Prix. Norris had donned a Union Jack bucket hat while conducting interviews in front of fans at Luffield as Hamilton was passing on a tour of the track. 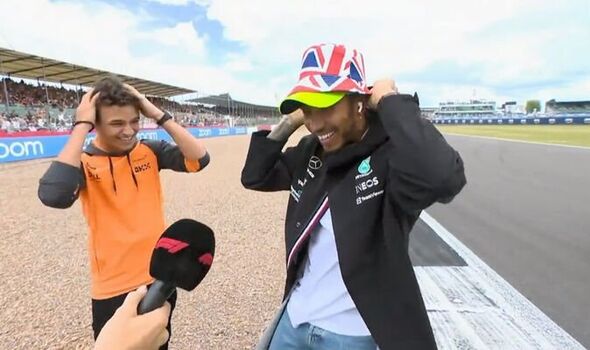 The seven-time champion hopped off his vinatge car and sneaked up on Norris in an attempt to grab the hat. Norris jokingly tried to defend himself but Hamilton managed to take it off him in a hilarious exchange.

Hamilton pulled Norris in for an embrace with the pair seen laughing ecstatically. Hamilton handed the hat back to Norris, giggling: “It looks good on you mate.”

Norris replied moments later: “He’s jealous, He’s jealous of the bucket hat. He does it my kind of style.”

Hamilton was in high spirits ahead of his home Grand Prix as he continued to wave at the crowd. The Mercedes star can enter the record books this afternoon if he wins the race or finishes on the podium.

The seven-time champion can break his own record of eight British GP wins and could become the first driver in F1 history to secure 13 podiums at the same venue.