F1 preview: A lap of the Austrian Grand Prix

Lewis Hamilton has claimed he was “grateful” to stay on track after a manic opening lap saw him almost retire from the race. The Mercedes star added he could not have done anything to avoid an incident at the start of the race and was lucky he got away unscathed.

Hamilton was involved in a collision with the Alpha Tauri of Pierre Gasly into turn one as the pack bunched together. However, Hamilton’s suspension stayed intact and the Mercedes star could continue with the race.

The Briton also warned his Mercedes car was “slower on the straights” which stunted his progress.

He said: “Obviously I had two cars come around me into tur one and came across me and there was nowhere i could really go. It was an unfortunate incident but I don’t think I could have done anything.

“I got the same thing in turn three so I was just grateful to get around the first lap. Then after that just trying to catch up but [we were] much slower on the straights so you kind of stay in the same place. 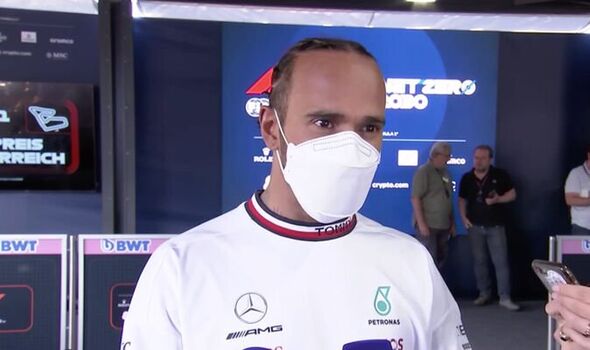 The early incident knocked Hamilton further into the midfield and forced the Mercedes driver to make a series of passes on track. But, the multiple champion was stuck behind the Haas of Mick Schumacher for much of the race after the German secured DRS on his team mate in front.

Schumacher was able to place his car in just the right places to avoid letting Hamilton through. The Briton eventually made the move stick but only after the Haas lost access to his DRS in the closing stages.

It has left Hamilton to claim his Mercedes was “slower” than the Haas in a warning for tomorrow’s Grand Prix. He will still need to pass Kevin Magnussen to make progress with the Dane starting just ahead in seventh. 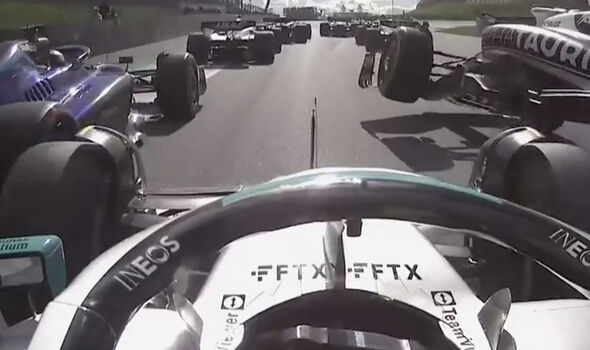 He said: “I didn’t learn anything necessary in the race except we are slower than the Haas in the straight. But I’ve got one now in front of me and not two.”

Mercedes appeared closer to ed Bull and Ferrari in qualifying yesterday but failed to capitalise after both Hamilton and George Russell were involved in heavy shunts. However, the pair seemed a bit further off the frontrunners in the sprint today.

Russell admitted the Silver Arrows were not as competitive as they had thought they could be.

He told Sky Sports F1: “We didn’t expect to have the pace of Red Bull and Ferrari but we were probably a little bit further behind than we anticipated. I think Checo is a realistic battle we can have but there is only a limited amount you can do overnight.”