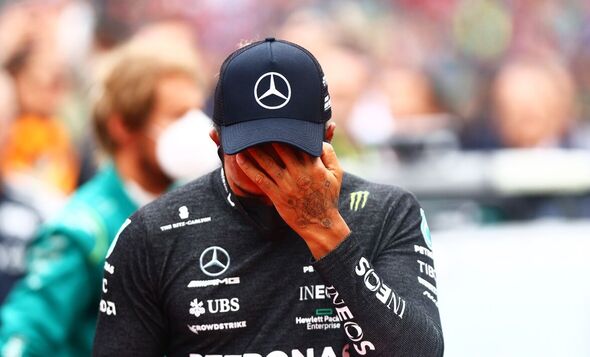 Lewis Hamilton has revealed his father “never let me cry” after speaking openly about the difficulties he faced as a youngster. Hamilton, 38, is primarily famous for his iconic career in F1, with his seven world title wins matched only by the legendary Michael Schumacher.

But the Mercedes man’s stint in motorsport hasn’t been defined by results alone, having long campaigned for more diversity in F1 and other industries. He’s also used his platform to speak out on perceived racial injustice, regularly wearing t-shirts with meaningful slogans on race weekends.

Hamilton himself has previously revealed he was subjected to racism as a child. Indeed, incidents aren’t confined to his youth, with footage emerging last year of Nelson Piquet using discriminatory language when speaking about the English driver.

And now he’s sat down with renowned podcaster Jay Shetty for his On Purpose programme, and opened up on his harrowing experiences. Shetty released a teaser of the interview on Instagram, with one clip showing Hamilton talking about his memories of one particular school.

JUST IN: ‘I had death threats’ – Jackie Stewart opens up on being ‘very unpopular’ with F1 fans

“That particular school I was probably one of three kids of colour,” he said. “Probably the most traumatising and most difficult part of my life. My dad never let me cry as a kid, he said it was a sign of weakness. I didn’t even know about suppressing a pain or a feeling.”

Hamilton, who has been reportedly discussing a contract extension with the Silver Arrows this week, was also shown giving a message to those seemingly at limbo with their lives: “A lot of people are struggling to find that purpose,” he added. “But it’s ok. You will find it. Do not give up.”

Shetty, who has previously interviewed the likes of Kobe Bryant, said “I can’t wait” for fans to hear the podcast chat with Hamilton. And he told his 12.4 million followers the episode would be worth listening to.

“We dive into his childhood and he shares with us a totally different perspective on finding your own purpose,” he wrote. “Truly honored that Lewis did his first ever podcast recording with us, and it does not disappoint!”