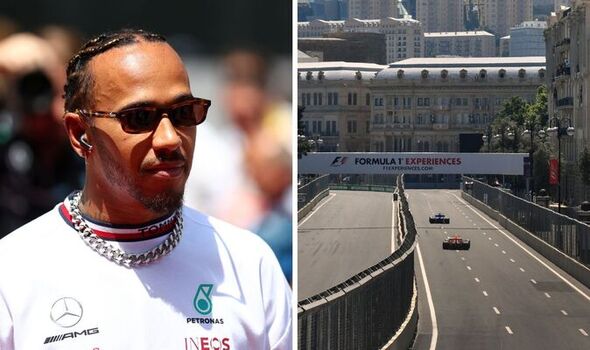 Lewis Hamilton and George Russell may end up going backwards this weekend at the Azerbaijan Grand Prix, according to Marc Surer. Mercedes began the 2022 season on the backfoot with both Red Bull and Ferrari setting the benchmark.

Hamilton in particular has struggled most weekends with Russell finishing ahead of his Mercedes team-mate in six consecutive races. The seven-time world champion has had his fair share of bad luck with Russell benefiting from a couple of timely safety cars around his pit stops.

But the last few races have seen Mercedes pick their race pace up with promising signs they’re heading in the right direction. Hamilton has indicated that he hopes to have a car capable of challenging for race wins by the time the British Grand Prix comes around.

That’s just four weeks away with two races before then, starting with Baku this weekend. However, former F1 driver Surer doesn’t see Mercedes continuing their progress at the street circuit.

JUST IN: Hamilton rules out Ferrari move as Brit vows to stay loyal to Mercedes

“You have to drive this stiff suspension to stop the ‘porpoising’,” Surer said on Formel.de. “That means the car is sprung so hard that it doesn’t start bouncing on the straights.

“They obviously got that under control to some extent. But now, of course, they’re losing with this tough set-up in the corners. And Baku is just a street circuit.

“It also goes up and down a bit and there are bumps there. I can’t imagine that the Mercedes will do great there.”

Hamilton looked on course to challenge for his second win in Azerbaijan last year after Max Verstappen suffered a tyre blowout. The British racing superstar started behind Sergio Perez on the standing restart and attempted a move into the first corner, but locked up as he skidded off into the escape road.

He ended up dropping to last and was unable to make up any ground in time before the end to finish in the points. It ended up being Hamilton’s worst finish in an F1 race in over 12 years and was the first time he finished outside the points since 2013.