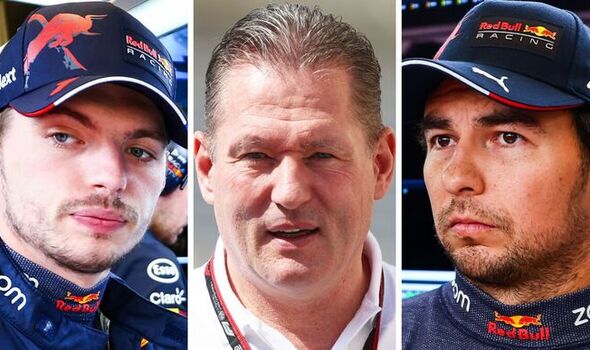 Jos Verstappen has weighed in on the fallout between his two-time world champion son Max and Red Bull team-mate Sergio Perez. Max Verstappen refused to follow team orders to allow Perez past during the last lap at the Brazilian GP and Verstappen Sr says his son has been ‘portrayed as the bogeyman’ after the incident.

Perez is locked in a battle with Ferrari’s Charles Leclerc for second place in the driver’s championship going into the final round in Abu Dhabi this weekend. With Verstappen already crowned as world champion the team ordered him to allow Perez to take his sixth place while the Mexican was a position behind in Brazil.

However, the Dutch driver failed to comply with the orders and when asked “what happened?” over team radio, Verstappen replied: “I told you already last summer, you guys don’t ask that again to me. Are we clear about that? I gave my reasons and I stand by it.”

It is believed Verstappen’s comments were referring to Perez’s crash at the Monaco GP which resulted in qualifying being red flagged hindering his team-mate’s run. The Monaco crash resulted in the Mexican starting ahead of Verstappen the following day before going on to win the grand prix.

Verstappen Sr said his son had been painted as the ‘bogeyman’ and he almost missed this weekend’s final round in Abu Dhabi due to the fallout. During an interview with Dutch newspaper De Limburg, Verstappen Sr said: “I’m not enjoying myself and I’m working on it all week.

“That’s how I work. Max was portrayed as the bogeyman, even though that is unjustified. When my wife says something to me, I don’t hear it. That’s how busy I am with it. That will always be the case. I doubted whether I would come to this race, but I got on the plane anyway.”

Verstappen Jr also spoke out in his press conference saying that he had read some ‘pretty disgusting’ things after the incident in Brazil last week. He added: “So all the things that I’ve read is pretty disgusting. And also, even more than that, they started attacking my family. They were threatening my sister and my mum, my girlfriend, my dad and for me that goes way too far.

“Well, you don’t even have the facts, of what actually was going on and that definitely has to stop. If you have a problem with me, that’s fine, but don’t go after my family because that is just unacceptable. But we move on.”