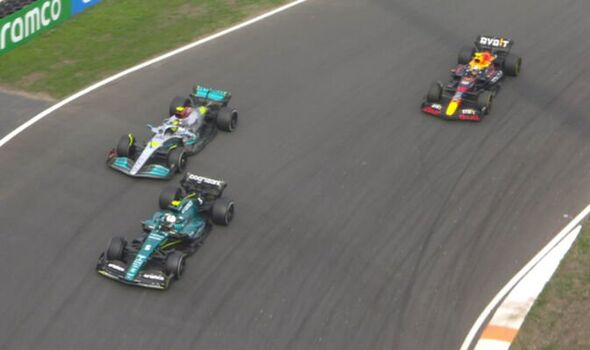 Lewis Hamilton fumed at Sebastian Vettel on the Mercedes team radio after appearing to accuse the Aston Martin driver of blocking him during the Dutch Grand Prix. The Briton came around the first turn only to find Vettel coming out of the pits in his way and was nearly overtaken by Red Bull’s Sergio Perez after having to slow down.

The 37-year-old had pitted for the first time, taking the hard tyres after an impressive opening stint on the medium in Zandvoort. And it seemed that Mercedes’ strategy for a one-stop race had worked perfectly as he came out of the pits, overtaking Perez in the process.

But Hamilton’s quest for a first race victory of the season was nearly ruined when Vettel came across his path and prevented the seven-time champion from getting past, with Perez eyeing an opportunity to retake fourth place. 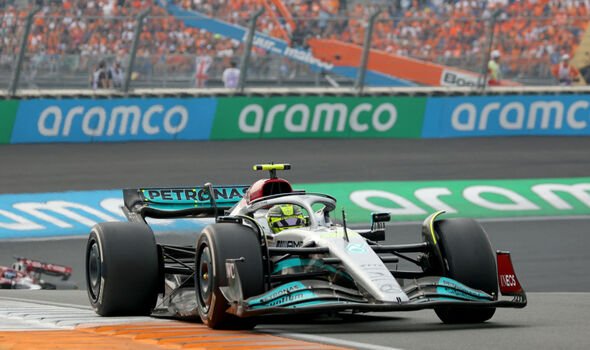 And the Mercedes star made his feelings known to the FIA, shouting “Blue flags!” at his former title rival, who is retiring at the end of the season.

The FIA confirmed that Vettel would be investigated for a possible breach of blue flag rules, which require drivers that have been lapped to safely move aside from faster drivers behind them.

The stewards, shortly after, appeared to agree that he had blocked Hamilton, handing the 35-year-old a five-second time penalty during the race. Hamilton is yet to win a race this season and is currently on his longest run without a victory since joining the team.

But the 2020 Drivers’ Championship winner showed impressive pace to rival championship leader Max Verstappen after rising from fourth to second in the race, leading after a late safety car but quickly losing first place to Verstappen at the restart.

Hamilton was able to leapfrog the Dutchman at his home race after Valtteri Bottas’ retirement caused the safety car to be deployed, forcing Red Bull to bring in Verstappen for new tyres.

And that allowed George Russell to also leapfrog Verstappen to make it a Mercedes 1-2 with 15 laps to go. But Verstappen was back out in front with 11 remaining after jumping Hamilton at the restart.