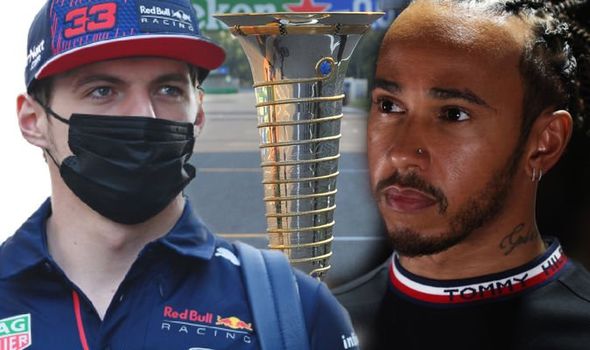 The 2021 Formula One Drivers’ Championship could well be decided this weekend at the Saudi Arabian Grand Prix. Max Verstappen can be crowned world champion for the first time in his career to dethrone Lewis Hamilton – and there are four ways he can do it.

The Dutchman heads to Jeddah with an eight-point advantage in the standings, though that gap had been 21 before the Brazilian Grand Prix.

Hamilton sealed back-to-back wins in Interlagos and Qatar to keep his hopes of a record-breaking eighth triumph alive.

The Briton has won the past four titles and is looking to overtake Michael Schumacher and become the outright most successful driver in F1 history.

Yet his hopes of doing so may be delayed another 12 months if Verstappen can enjoy an 18-point swing at the inaugural race in Saudi Arabia.

Should Hamilton finish fifth or higher, there is no chance of the Red Bull driver ending Hamilton’s monopoly of the championship.

Yet if the in-form Mercedes man cannot manage that, there are four possible scenarios that would result in Verstappen receiving the trophy and being named world champion for the first time.

Verstappen can clinch a maximum of 26 points if he wins the race and claims the fastest lap. Were Hamilton to finish sixth or lower, Verstappen would be on an insurmountable 377.5 points, with the Briton on 351.5.

Elsewhere, if Verstappen wins the race without the fastest lap, he would need Hamilton to finish seventh or lower.

The 36-year-old seven-time world champion has only finished P7 or lower three times this season, with a seventh-placed finish in Monaco while he ended 15th in Azerbaijan and suffered a DNF in Monza.

Verstappen can even finish second and win the title but would need the fastest lap and for Hamilton to end up 10th, for which he would claim just one point, or lower.

Should the 24-year-old come second without the fastest lap, claiming 18 points, Hamilton would need to finish outside of the top 10.

There has already been two occasions on which there has been an 18-point swing this season, including the aforementioned race in Monaco.

Verstappen was the winner in Monte Carlo while Hamilton ended up seventh after struggling in qualifying, while poor strategy call from Mercedes left the driver frustrated.

At the British Grand Prix, in which Verstappen suffered a 51G crash as Hamilton sought to overtake him into Copse corner, the Silver Arrows were the beneficiaries of an 18-point swing.

Verstappen had headed to Silverstone 32 points in front at the top of the standings but had his advantage cut to just eight by Hamilton’s home race victory.

Heading into the Saudi Arabia race, Verstappen said: “Fighting against Lewis in general has been good for the sport. It’s a young guy against the established world champion, multiple world champion, and I think it’s just very exciting.

“And for me at the end of the day it doesn’t matter if you’re fighting against someone who’s my age or a world champion, you know both of them are great drivers.

“Some might have had a bit more luck in general to be in a good car for a longer time but that doesn’t take away that they’re a great driver and yes, we always try to beat each other, of course. But I think so far it’s been a really cool season.”

While Hamilton said an eighth title would be the most meaningful yet, explaining: “Yeah, for sure. One being that again it’s something that no one’s ever done before.

“It’s been the toughest battle that the sport has seen for a long, long time, and the most challenging, so I think collectively it would be. Plus we’re in a pandemic, so all sorts of things we’ve been faced with.”

– If he wins with fastest lap and Hamilton finishes 6th

– If he wins and Hamilton finishes 7th

– If he finishes 2nd with fastest lap and Hamilton finishes 10th

– If he finishes 2nd and Hamilton finishes outside the top 10