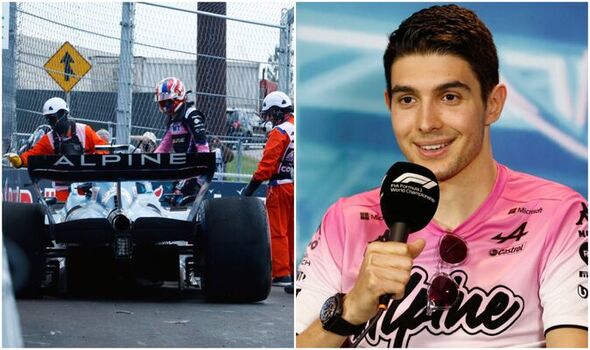 Esteban Ocon slammed the ‘unacceptable’ lack of a Tecpro barrier at Turn 13 on the Miami Grand Prix circuit after suffering a strong crash on Saturday. The Alpine driver revealed that Ferrari’s Carlos Sainz had already questioned the FIA on the safety of the turn after suffering an injury on the same part of the track during practice.

Ocon suffered 51G impact in his crash, something he says would not have happened if there was a Tecopro barrier. The Frenchman told his team radio that he was unhurt but was still taken for medical examinations.

The FIA have now been questioned by several drivers over Turn 13. Sergio Perez, Pierre Gasly and Lance Stroll were all left unhappy with the safety. The latter branded it “ridiculous” and “a joke”.

Ocon wonders why the governing body did not listen to Sainz after he initially raised the issue. The 25-year-old told journalists: “What is unacceptable really, it was 51G for what should have been not such a big impact. To not have it and [for only] one car it has happened, but when Carlos has complained to the race director, we were all there listening to it, and nothing has been done.

“There was a discussion last night. Carlos said the impact was way too big for what it should have been. Today it felt huge, the impact. It’s probably the biggest shunt of my career, to be fair.

“Yesterday (Friday) Carlos got hurt. I got hurt today (Saturday) as well. The FIA should push harder for our safety. The important thing is that we’re able to race, and I will be able to race as well.”

“When a professional driver to the calibre of Carlos, racing for Ferrari, is saying something like this yesterday, I think the minimum is that it should be taken into consideration, and do the best possible to make a change.”

Ferrari’s Sainz confirmed that he had told Formula One chiefs that a Tecpro barrier needed to be put in front of the concrete wall. The Spaniard said: “I’m sorry to be critical, but I told the FIA yesterday that my crash at second gear shouldn’t feel that hard, but today my neck was a bit in pain. I told them, let’s put Tecpro there, because it’s a very hard concrete wall.

“Esteban crashed, and I’m sure he felt it too. And it’s one of those things that I will never understand.” Ocon will start at the back of the grid in Sunday’s Grand Prix having failed to finish qualifying while Sainz will be on P2 after being edged out by Ferrari team-mate Charles Leclerc on Saturday.