Sergio Perez collided with Ferrari’s wheel gun after Carlos Sainz was stuck in the pits for over ten seconds. Perez’s rear right tyre made contact with the tool as he was leaving his pit box.

Ferrari mechanics had thrown the gun behind them as chaos ensued during the Spaniard’s stop. Perez was horrified at the incident, complaining about the Ferrari mechanics over team radio moments later.

He said: “[Expletive] they left the gun out.” However, Jenson Button claimed the contact would not have left any damage on the Red Bull.

The FIA have announced the incident will be investigated after the race with Ferrari likely to be hit with a financial penalty. Sainz appeared to have been called for his stop at the last minute which caused confusion among the mechanics. 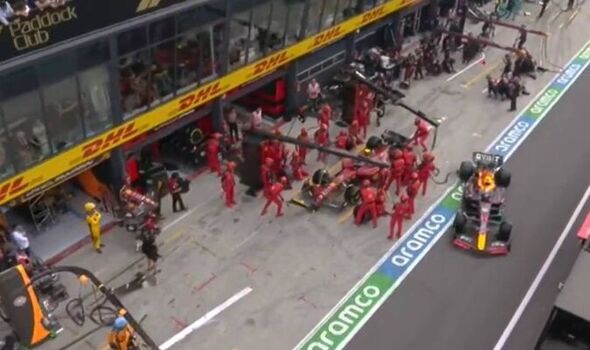 He explained: “​​Perez went over the wheel gun, not the cable. I don’t think they had a tyre at the rear left for Carlos Sainz. And it’s so tight down there in that pitlane. That gun was left in quite a dangerous position while Ferrari were trying to sort out their tyres.”

Jenson Button claimed the contact would not have left any damage on the Red Bull but was said the issue was disappointing for Sainz. He added: “It didn’t look like they were ready. 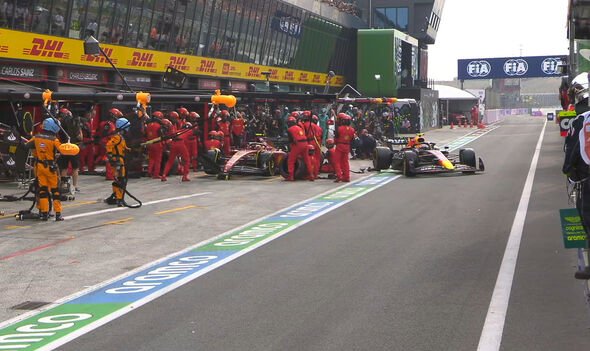 “He came into the box, there was someone running around the front of the car and yeah for Checo to get in and get out, he was a long way behind Carlos was. Disappointing for Carlos.”

Ferrari boss Mattia Binotto said the pit stop was a “mess” when interviewed on-air moments after the incident. It’s Ferrari’s latest strategic error after a raft of issues over the course of the 2022 season so far.

The team has been blamed for making mistakes at the Monaco, British, French and Hungarian Grand Prix which cost points. However, Sainz’s issue helped release Lewis Hamilton into clean air as the Mercedes star was stuck behind the Spaniard in the opening phase of the Grand Prix.