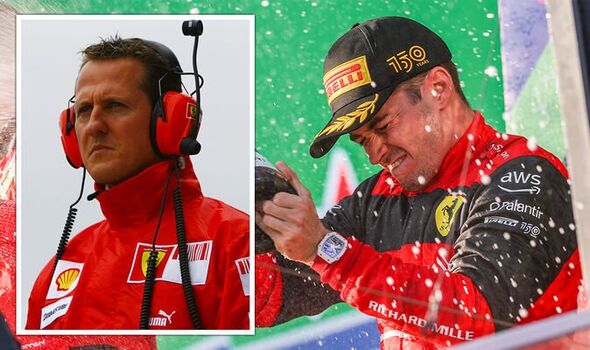 Ferrari boss Mattia Binotto has claimed there will be no team orders this early in the season despite Charles Leclerc sitting 38 points ahead of team-mate Carlos Sainz. The Prancing Horse has a recent history of using team orders in their battle for the drivers’ title, most famously in 2002 with Michael Schumacher.

The team favoured Schumacher as early as round six in Austria with Rubens Barrichello slowing down on the final laps and letting him past with just metres to go. Schumacher had dominated prior to the A1 Ring with four wins from five races.

After the race, the Ferrari pair were met with boos from the crowd with the move branded a disgrace by pundits. Schumacher then let Barrichello onto the top step of the podium despite finishing second which later saw Ferrari fined.

However, Ferrari seems to have learned from their history with Binotto claiming the drivers were still free to race for wins.

He explained: “They are free to fight. I think that’s important for us. For Carlos I think it’s important for him to prove the speed and the pace. He will come back. I will enjoy then the battle for a good position in the championships.”

Team orders were used again in the 2010 German Grand Prix as Felipe Massa was asked to give up the win for Fernando Alonso. The Brazilian was told by race engineer Rob Smedley: “Fernando is faster than you” before apologising to the driver.

After the race, Massa denied team orders were used with Smedley saying he was only apologising for the situation rather than a team order.

Throwing it forward to the present day, Ferrari could win their first world title since 2008. However, Binotto still downplayed the expectation for Ferrari to lift the crown.

He added: “We are not managing the championship right now, it’s only three races. We stay focussed on each single race and that is the way we will approach.

“That one was great, we know in order to do a good weekend and to win you need to be perfect. That was the case in Bahrain because it’s always very tight, we were not perfect in Jeddah and we lost. I think here it’s been a great weekend and I think every single race we try and do our best.

“That’s how we will approach Imola and the following one.”