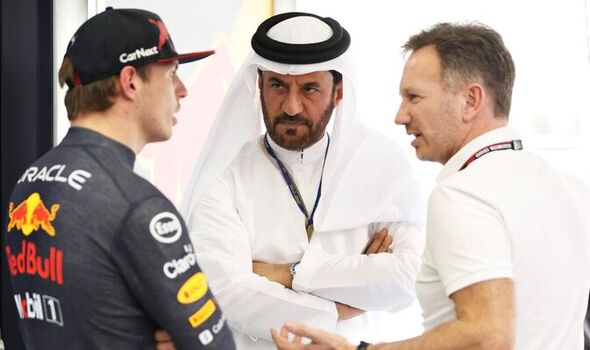 Red Bull and Verstappen have been on the defensive since the controversial end to last year. And they took matters into their own hands after Kravitz spoke of how Hamilton had been “robbed” of the 2021 championship.

Red Bull decided to boycott Sky Sports for the entirety of the Mexican Grand Prix in response to Kravitz’s comments. Verstappen explained after the race: “It had nothing to do with this weekend, but this year. It has been a constant kind of digging and being disrespectful, especially from one particular person. At some point, it is enough and I don’t accept it.”

And Christian Horner felt it was necessary action after the “derogatory comments” with Red Bull wanting to “lay down a marker”. The saga has dominated headlines since and saw George Russell even make a joke about the stand-off at the Las Vegas launch party this past weekend.

David Croft was hosting the event when he was getting ready to speak to Sergio Perez on stage before Russell jumped in, jokingly asking: “Are you allowed to ask Red Bull drivers questions Crofty?” The whole matter has grabbed the attention of F1 bosses too, who are said to have stepped in to help resolve the situation.

According to RacingNews365, the organisation have been ‘quite concerned’ about the row between Sky Sports and Red Bull. And they’ve now tried to ‘mediate’ the issue in trying to find a resolution heading into the Brazilian Grand Prix.

Red Bull are expected to end their boycott of Sky Sports this weekend for the penultimate race of the year. Mercedes are still looking for their first win in 2022 having come close in both Mexico and Austin.

But James Vowles, Mercedes’ strategy director, fears the team won’t be as competitive at the Sao Paulo race. “I think this will really vary track on track. Ferrari won’t be that far back and away from us as they were in Mexico. They will be closer in Brazil and in Abu Dhabi, and it will be a very close fight between our two teams,” he said.

“In terms of relative to Red Bull, they still hold the edge relative to us. I don’t think it is quite the three-tenths they outqualified us by, but it will be a few tenths across the next few races.”