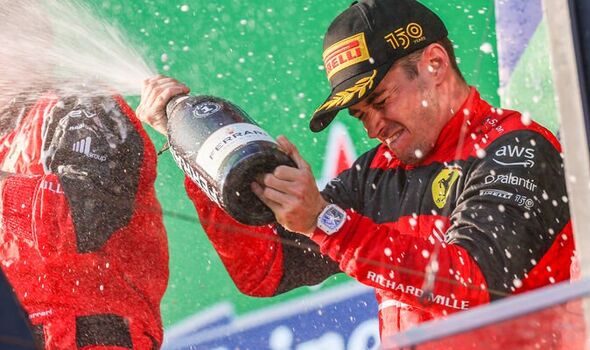 Charles Leclerc could break two F1 records in Imola if he continues his dream start to the 2022 campaign. The Monegasque could break the record for the most points ever after four rounds of an F1 season, which currently stands at 105.

He could also end the weekend with the most commanding lead after four races, which sits at 43. The current record was held by Nico Rosberg who won the first four races of the 2016 season.

However, Imola’s sprint race format means there are even more points up for grabs this weekend. The rule change also means there will be more points available after four races than previous F1 season.

Leclerc currently sits on 71 points meaning he would need to win the race, secure fastest lap and score points in Saturday’s sprint race to stand a chance of reaching 105 points to equal the record. Changes for the sprint will see eight points handed out for a win compared to just three last season.

It means Leclerc must win the race and hope George Russell fails to score points. But, his chances of beating the second record are slightly more favourable as he currently sits 34 points ahead of Russell.

It means Leclerc will surpass the 43 points bar if he wins the race on Sunday and Russell is third or lower. However, the Ferrari star is unable to break the record on Saturday even if Russell does not score.

It is believed all three top teams will bring some minor upgrades to Imola as the development race gets underway. The sprint weekend format means teams get just one hour ahead of qualifying on Friday so major upgrades have been delayed.

Ferrari was expected to fit an upgraded floor to the car but reports from Italy suggest this is no longer likely. Team Principal Mattia Binotto warned it would not be until “later in the season” that the bigger upgrades would be installed.

He added: “I think it will be a difficult weekend in the respect of bringing updates and trying to evaluate them in Friday practice because obviously you need to focus yourself on the qualy in the afternoon. If we look at ourselves, there will not be much at Imola because again we believe it will not be the right place.”