Formula 1 has set pulses racing around the globe over the past 12 months, particularly after all the thrills and spills that came during last December's remarkable Abu Dhabi Grand Prix decider.

But in recent years, some of the sport's biggest names – including the likes of seven-time champion Lewis Hamilton – have set tongues wagging with their raunchy confessions over antics away from the track.

Here, Daily Star Sport takes a look at six of the biggest names in F1 history who haven't been shy about revealing some of their sex-related secrets, from secret romps in a car to an impromptu strip club visit on the eve of a race.

Hamilton has made no shortage of headlines since bursting onto the F1 scene back in 2007. The Brit has equalled Michael Schumacher's long-standing record of seven world title wins – and he even came agonisingly close to breaking that record outright back in December, when he was controversially pipped to the post by Max Verstappen in Abu Dhabi.

But the 37-year-old has also made headlines away from the track. He was one half of one of showbiz's biggest power couples alongside Nicole Scherzinger back in the 2010s. And he revealed that the only thing better than going full throttle in a F1 motor was spending quality time in a good car with the Pussycat Dolls stunner prior to their shock split.

Speaking to Playboy back in 2015 – before their split – Hamilton opened up on their raunchy bedroom antics and admitted: "The best thing is probably good sex in a good car. When it comes to good sex, nothing comes close."

Who do you think will win the Miami Grand Prix? Let us know in the comments section below. 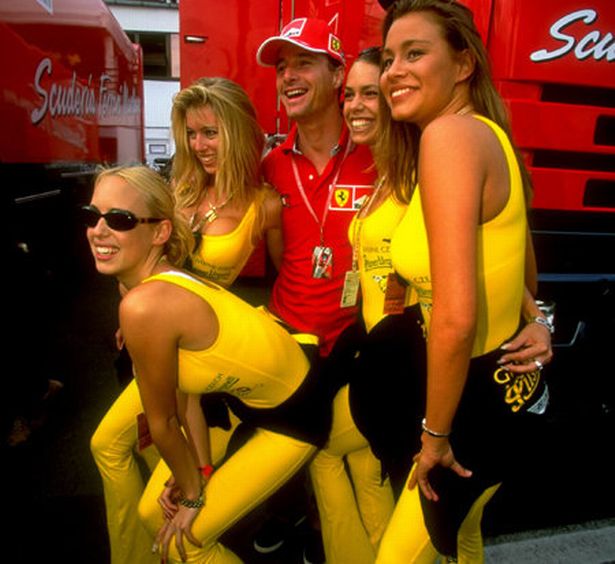 Former F1 playboy Eddie Irvine is another star who has never tried to shy away from his sex-life – and he gave away even more than Hamilton about his lavish lifestyle.

The 54-year-old, who admitted that he has "no idea" how many women he's bedded in an interview with The Daily Record back in 2000, claimed: "Sex is too easy. It's an easy way to have fun, isn't it? It's not massively challenging."

And he opened up further on how he'd often lust for other women even when he was in a relationship. He added: "Even if you're with the most beautiful girl in the world, the one across the table looks better – and the next one better still. Where does it all end? Usually in tears."

Just like Hamilton, Daniel Ricciardo has had dated a string of stunning women down the years. The 32-year-old, who has been one of the more prominent stars in the 'Drive to Survive' Netflix series, is reportedly dating Heidi Berger – the daughter of former F1 star Gerhard Berger.

The McClaren man has racked up eight victories and a host of podium finishes during his career, but he had an unusual pre-race ritual regarding sex. Ricciardo revealed back on the Armchair Expert podcast back in 2020 that he used to abstain from sex before a big race – until he ended up reaping the benefits from breaking his own rule.

Ricciardo revealed: “I used to, but not any more. I went against my rules obviously once and I was probably even better on Sunday so it’s all good. I threw that one out a few years ago.”

Jenson Button tasted glory back in 2009 when he clinched the F1 title, but the former Brawn and McClaren ace spoke out after being dubbed as a pin-up during his racing days.

Button previously said: "To be fair, I've never thought about [being a sex symbol]. [Our fans] treat us like racing drivers, because that's what we are. We're here to race cars, and that's what we're here to do, and I think that these guys who are sat out here in the pouring rain are here to watch us race cars, and not take photos of us in our underwear. No special poses."

Although Button was never pestered for underwear photos by F1 fans, he did tie the know with lingerie model Jessica Michibata back in 2015. However, Button has found love again and married his new beau, 31-year-old model Brittny Ward.

F1 icon David Coulthard won a host of admirers during his 25-year career – and he believes that his pre-race bonking ritual actually had a hand in his numerous successes on the track.

And unlike Ricciardo, it appears as though Coulthard never considered shirking a pre-race warmup in the bedroom. When quizzed back in 2002 over his thoughts on having sex before a race, he reportedly told the Irish Examiner: "Sure, why not? Sex makes you fast."

Coulthard – who reportedly split with from his wife, Karen Minier earlier this year – has been linked to Swedish stunner Sigrid Silversand. Coulthard, 50, and the 27-year-old model were spotted taking a stroll and sharing a snog in London back in January.

Sebastien Vettel made history back in 2010 when he became the youngest ever racer to win the F1 Drivers Championship – the first of four consecutive title wins for the Red Bull star.

Vettel made his F1 debut at the last minute, replacing Robert Kubica back in 2007. But he revealed that he was dragged into a strip club in Montreal just hours before he got behind the wheel for the first time on the F1 circuit.

Speaking to Blick back in 2011, Vettel revealed: "Yeah, the Sauber mechanics one night dragged me into one of these famous sex clubs (in Montreal). When two girls got busy with each other right before my eyes, it was too much and I left!"