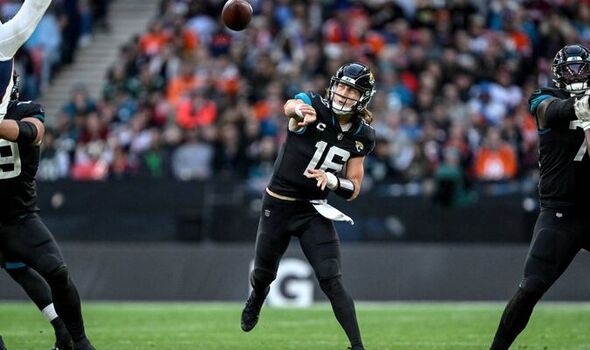 No quarterback prospect in recent years has had a billing comparable to Trevor Lawrence, but the former number-one overall pick is yet to fulfil his promise for the Jacksonville Jaguars. The 23-year-old was universally acclaimed when coming out of Clemson but his NFL career has been a struggle and he hit a new low in Sunday’s 21-17 defeat to the Denver Broncos at Wembley Stadium.

He threw two ugly interceptions, costing his team badly in a game they could ill afford to lose with their post-season hopes dwindling fast.

The Jags started the year with real promise, but they have slumped to 2-6 after a five-game losing streak that has left their season in tatters, and that run has also given Lawrence an unwanted place in NFL history.

After losing five games on the spin, Lawrence is 5-20 as a pro, making him the worst of all the 26 quarterbacks drafted number one overall since the common draft era began in 1967 through their first 25 games, behind high-profile busts like JaMarcus Russell and David Carr.

There were plenty of mitigating factors as the Jags – repeatedly among the weakest franchises in the NFL over the past decade – finished Lawrence’s rookie year 3-14, with head coach Urban Meyer fired before the end of the season in December after the team descended into chaos.

This year, under a safer pair of hands in Super Bowl-winning head coach Doug Pederson, there was optimism Lawrence’s true ability would shine through. This effectively has been viewed as take-two of Lawrence’s rookie year, so disastrous was Mayer’s reign in Duval.

A national champion in college, Lawrence has shown glimpses of his class this season, but there have been too many game-defining mistakes and with Mayer long gone the excuses are running out.

Obviously, the Jags will give Lawrence every chance to come good as a professional, but his play is a big reason why they are 2-6 and third place in a very weak AFC South.

Across the five-game losing streak, Lawrence has thrown just four touchdowns to five interceptions, with a completion percentage of 57.8 and a passer rating below 73 that ranks him among the worst quarterbacks in the league.

Admittedly, Lawrence does not have an all-star supporting cast on offence and the defence has fallen short of expectations, but Sunday was the latest example of him making big mistakes in big spots. A goal-line interception in the first half to go into a two-touchdown lead is not a play fitting of an elite quarterback, which is what almost all analysts expected Lawrence to be.

A place in the play-offs may be beyond the Jags now, but Lawrence needs a strong second half of the season to finally bring some optimism to a franchise in need of it.