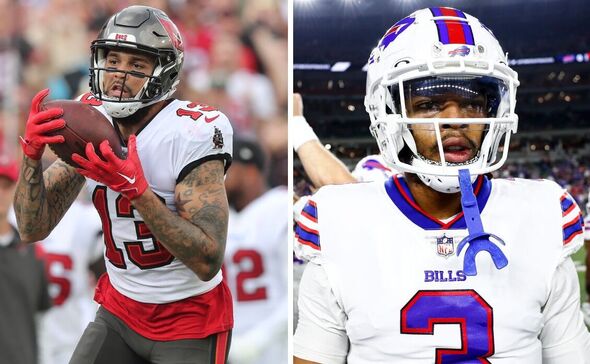 During the crucial match between the Bills and Bengals, Hamlin collapsed on the turf midway through the first quarter. The 24-year-old fell after making a tackle on Tee Higgins and had to be revived on the field before he was rushed to the University of Cincinnati hospital.

The match was understandably suspended as no players were in the right state to continue playing, while there was a tsunami of support for Hamlin and his family in the aftermath of the worrying scene. On Thursday, University of Cincinnati Health physicians Dr. Timothy Pritts and Dr. William Knight announced Hamlin began to wake up that morning, while they confirmed his neurological function was intact.

On Friday, the Bills revealed the physicians at UCMC confirmed Hamlin’s breathing tube had been removed overnight and the safety has reportedly spoken to his family, his care team and Bills teammates. Evans confirmed he, along with the entire NFL world, was pleased to hear Hamlin’s progress during an interview with ESPN.

When asked if he is concerned about the physical nature of the game moving forward, Evans offered a rather peculiar response as the horrific scenes have appeared to inspire him to play harder. He added: “Me personally, it was scary to see.

“But it just makes me want to go even harder because you never know when it’s gonna be your last time. You never know. Got to give your all every time.”

Evans’ Buccaneers have already clinched the NFC South title despite a turbulent campaign. It appeared for some time as though Tom Brady would fail to reach the postseason, but he securde his 14th straight playoff appearance, as well as the 19th divisional title of his illustrious career.

The 8-8 Bucs face the Atlanta Falcons in their final clash of the season, while the Bills – who have also clinched the AFC East – take on Brady’s former team, the New England Patriots. The Pats need to triumph to keep their playoff hopes alive while Buffalo will secure the first seed in the AFC with a win.

Ahead of the final week in the 2022 regular season, the NFL announced a number of gestures to support Hamlin as he begins his road to recovery, with all 32 teams encouraged to read a special message before kickoff as a unified show of solidarity for the Buffalo safety. Meanwhile, the Bills revealed they are set to wear special jersey patches displaying the no.3 – Hamlin’s jersey number – when they face the Patriots on Sunday.

The NFL have also allowed teams to outline the ’3’ at each 30-yard line marker in the Bills’ iconic blue or red colours. Finally, all players will be permitted to wear black Nike t-shirts that display the message: “Love for Damar 3.”