The NFL’s popularity is rising across Europe with MILLIONS desperate for tickets to see London and Germany games… as Roger Goodell closes in on his $25bn revenue target, it’s clear that the international market is showing NO signs of slowing down

The NFL doesn’t do things by halves. So when the league began exporting itself 15 years ago, there was even talk of London hosting a Super Bowl and having its own franchise, to boot.

While things have gone silent in both those respects, the English capital remains the NFL’s European hub as it continues its bid for global domination.

But with newer markets emerging, what does the future hold for the NFL in London and the continent? 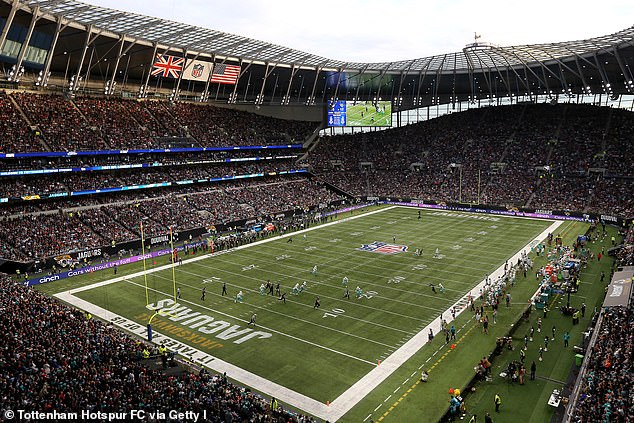 Tottenham’s 63,000-seat London stadium has a specific NFL pitch underneath its soccer field

In 2010 NFL commissioner Roger Goodell set a lofty goal. At the March owners meeting he declared that he wanted to see the league post a yearly revenue of $25billion by 2027. At the time, the NFL’s annual revenue was $8.35bn.

Four days before the Los Angeles Rams beat the Cincinnati Bengals in Super Bowl LVI, Goodell was reminded of his target.

‘We don’t look at that number as the objective, honestly,’ Goodell replied in his annual address. ‘When we look at how we want the league to grow, we measure it in a lot of different ways. Most importantly, the fan base itself – how are we growing the game on a global basis?

‘We expect to have close to 200million fans here in the United States, but our real objective is how do we grow the game globally.’

It was in 2007 that the NFL staged its first regular season game in London. They are now established annual visitors, Covid aside, with 33 games taking place so far. 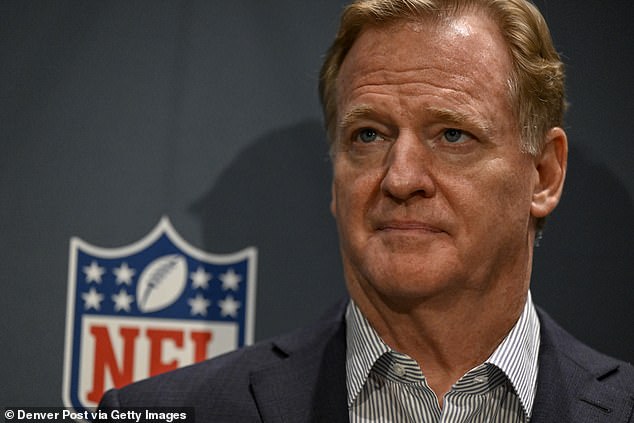 In 2010 NFL commissioner Roger Goodell (pictured) set a lofty goal. At the March owners meeting he declared that he wanted to see the league post a yearly revenue of $25billion by 2027. At the time, the NFL’s annual revenue was $8.35bn 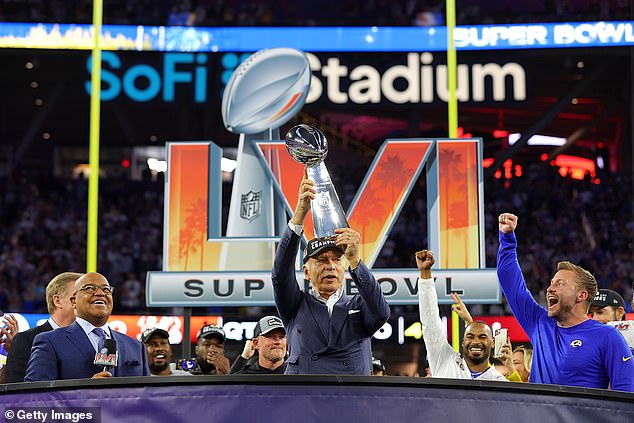 The Super Bowl is arguably the biggest event in the world of sport, drawing millions of viewers

The experiment has been such a success that the NFL helped to build its own $922.5million (£800million) home away from home at the 62,850-seater Tottenham Hotspur Stadium, complete with retractable purpose built pitch and some of the League’s largest locker rooms.

Across the capital the Jacksonville Jaguars will be renewing their relationship with Wembley Stadium and its 27,000 extra seats until at least 2024. Owned by Fulham supremo Shad Khan, the Jags are the most frequent visitors to London, playing eight times since 2013.

They were due to play back-to-back home games in 2020 until the pandemic intervened.

Khan – who failed with a bid to buy Wembley in 2018 – has often been touted as the owner who may take the leap and move his franchise to London.

Asked if any team would do so, he replied: ‘Personally, in my humble opinion, I don’t think it’s anywhere near close to that. We don’t want to have more games than there’s really organic demand for.’ 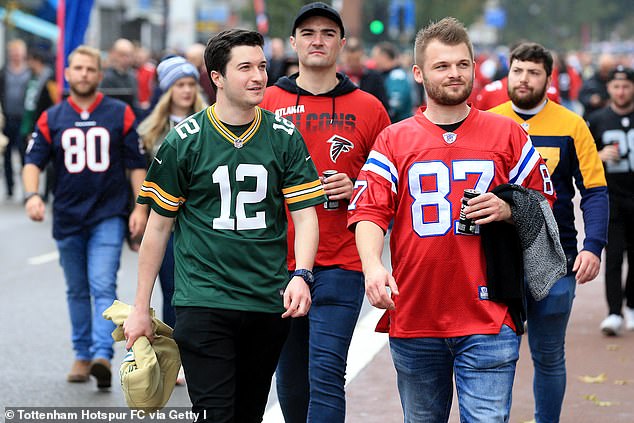 Fans arrive at the stadium ahead of the NFL London 2021 match between New York Jets and Atlanta Falcons at Tottenham Hotspur Stadium on October 10, 2021 in London 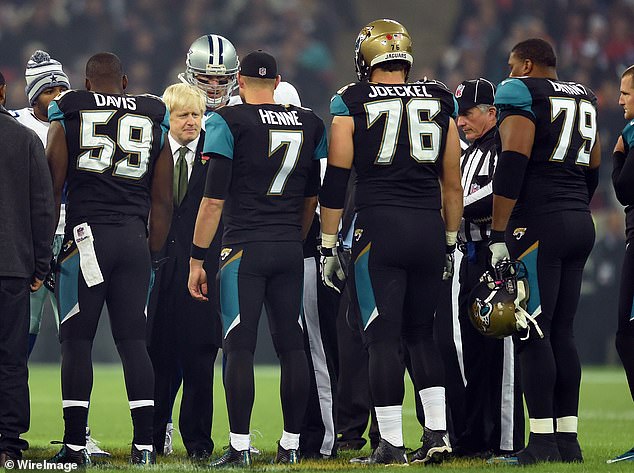 Boris Johnson attends as the Dallas Cowboys play the Jacksonville Jaguars in an NFL match at Wembley Stadium on November 9, 2014 in London 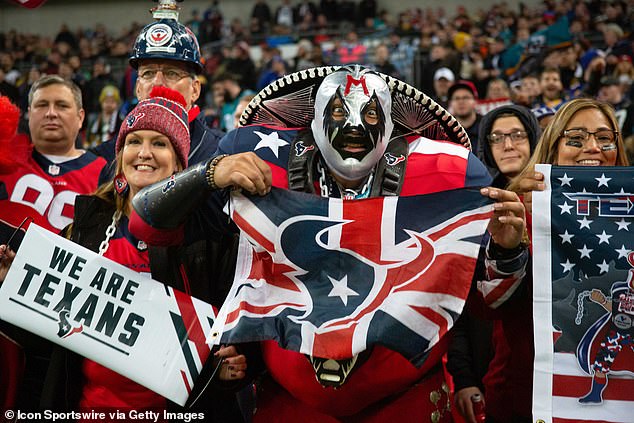 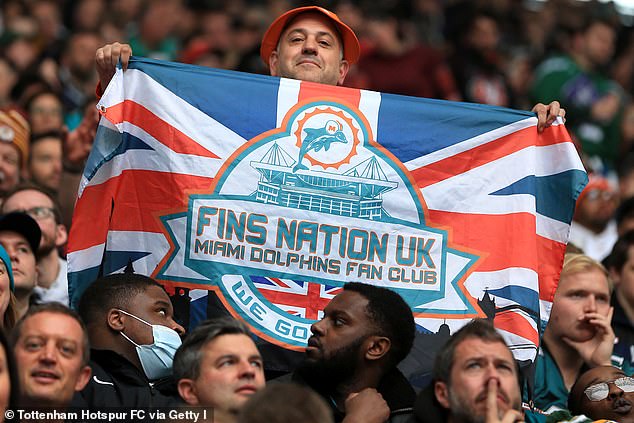 Fans are seen during the NFL London 2021 match between Miami Dolphins and Jacksonville Jaguars at Tottenham Hotspur Stadium on October 17, 2021 in London

The demand for the NFL in Germany has always been high. NFL Europe, which ran between 1991-2007, featured five German-based teams.

It has the infrastructure, stability and stadiums that the NFL desire and require and last season German subscribers to Game Pass, the NFL’s streaming service, rose by 125 percent.

So it was little surprise when Goodell announced that Munich will host a game this year with four total games in Germany over four years – two in Munich, two in Frankfurt.

‘We are very pleased to welcome Munich and Frankfurt to the NFL family and are excited to reward our fans in Germany for their passion by bringing them the spectacle of regular-season NFL football,’ Goodell gushed in a statement.

German fans duly showed their passion this month by snapping up tickets for November’s game between the Tampa Bay Buccaneers and the Seattle Seahawks at the Allianz Arena.

NFL Germany general manager Alexander Steinforth told RAN: ‘We were able to anticipate it a bit in advance due to the approximately 600,000 registrations for this presale in the past weeks.

‘At the peak, however, there were about 800,000 people in the virtual queue at the same time. Ticketmaster told us afterwards that they could have sold around three million tickets. 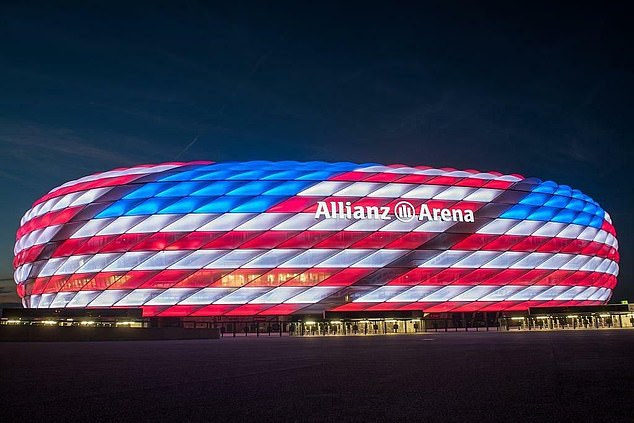 ‘This level of demand – whether for sporting events or concerts – is usually only seen at the Super Bowl. So this advance sale for the NFL’s German game has once again exceeded all expectations.’

It seems inevitable that further games in Germany and an expansion into newer European markets will follow.

The move into mainland Europe echoes that of some recent personnel changes within the NFL’s continental offices.

At World Rugby, Gosper’s remit was to make an established sport more popular. His task at the NFL is the same.

UK general manager Henry Hodgson, who reports directly to Gosper, told Sportsmail: ‘Germany, is something we’ve been really focused on growth for the last five or six years and we’re now looking at which other markets are showing that same signs that Germany had five or six years ago to potentially be the next market. The obvious ones are France and Spain.

‘Teams were excited about Germany. It has been a long process. It wasn’t just like, let’s put a team there. There was a lot of build up to that in terms of getting the right media partnerships, growing the player base there and putting flag football in Germany as well. So there were lots of steps that led up to it.

‘We knew that there were a lot of NFL teams that were interested in Germany, and Germany has a lot of fans. So it has been an organic process.’ 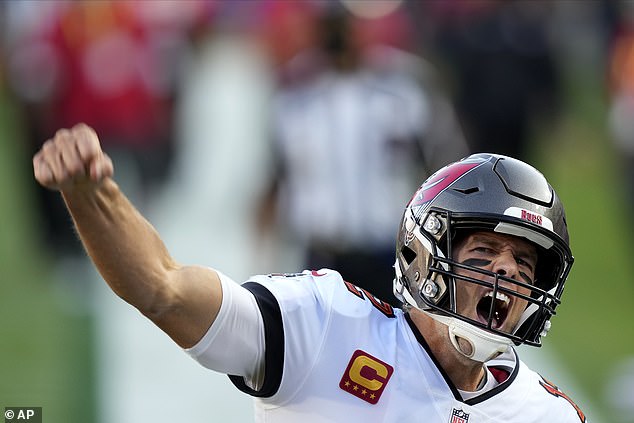 Whereas a few years ago playing in England was one of the prerequisites to hosting a Super Bowl, now it is a necessity.

All 32 teams will play a game outside America with at least four fixtures at a neutral site each season until 2030. As well as the UK and Mexico – which has hosted four regular season games – Canada and Germany will be hosting games.

After swelling the regular season to 17 games last season, teams have greater leeway to absorb the impact of an overseas trip. That’s the theory, at least.

Some franchises have embraced the idea of international expansion more than others. Last year 18 teams took up the opportunity to access international markets across eight countries.

The Jaguars joined the Chicago Bears, Miami Dolphins, Minnesota Vikings, New York Jets and the San Francisco 49ers as the teams awarded rights in the UK.

‘We are empowering clubs to go build their fan bases internationally,’ said Chris Halpin, executive vice-president and chief strategy and growth officer at the NFL. ‘The teams want to do it, our owners are sophisticated business people, with multiple sports properties.’

Vikings co-owner Mark Wilf was delighted to see Minnesota return to play in London for a third time. With a 100 percent record on these shores, the Vikings play the New Orleans Saints at Tottenham on October 2.

‘We have a bit of heritage, certainly in Northern Europe. Over time we have played exhibition games many years ago in Scandinavia,’ he told Sportsmail. 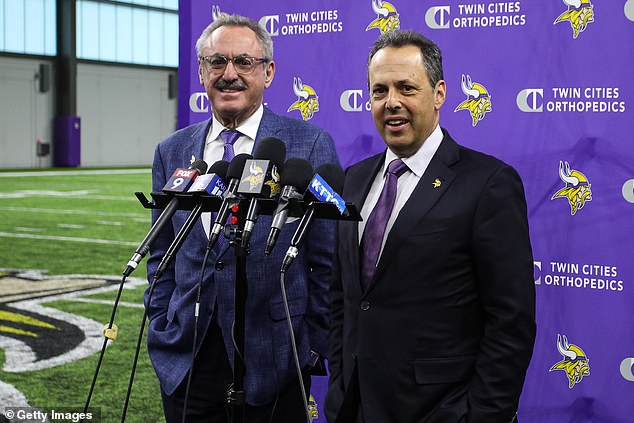 ‘I know we have great fans in the UK. They have a track record, they stay up late to watch our games and there is a lot of engagement on our localized, UK social media channels. So really it is just a great opportunity to keep that connection going and growing.

‘We’ve enjoyed our visits to London, we spent a good amount of time on our first visit in 2013 as a home club. We spent the whole week there and fans couldn’t have been more gracious, more hospitable.

‘And of course, we were fortunate both times to come away with victories but more importantly, each time we go, with every cheer that goes up you can see how the knowledge of American football, the appreciation, the passion, the energy grows, and we look forward to keeping it going.

‘I read somewhere that over 14 million people in the UK are now fans of the NFL. I mean that’s a small country right there!’

Goodell’s rein will be remembered for many things: The Ray Rice scandal, the Deflategate saga, his alleged protection of embattled Commanders owner Daniel Snyder, the treatment of Colin Kaepernick and the $1bn concussion settlement, to name a few.

But international and financial growth are some of its other startling legacies. After all, Goodell is a man who earned almost $128m in salary and bonuses between the fiscal years of 2019 and 2021, according to the New York Times.

And if things continue on an upward curve, it looks likely that the NFL will hit his $25bn target in 2027, with its European expansion a key factor.

The UK has set the bar for the NFL’s European experiment and with the NFL Academy, the International Combine and the NFL Foundation all based in England, it will remain a fixture for years to come. 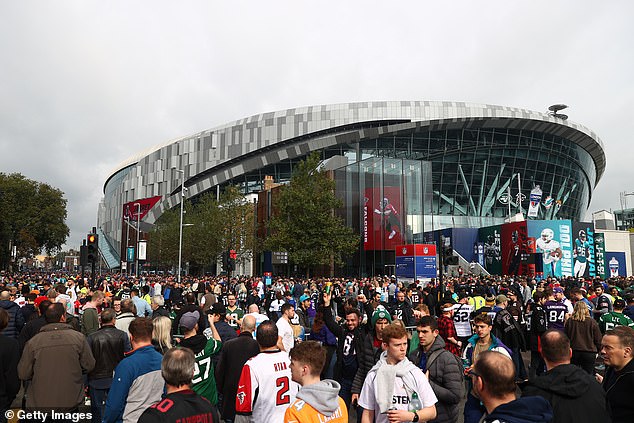 Fans arrive outside the stadium ahead of the NFL London 2021 match between New York Jets and Atlanta Falcons at Tottenham Hotspur Stadium on October 10, 2021 in London