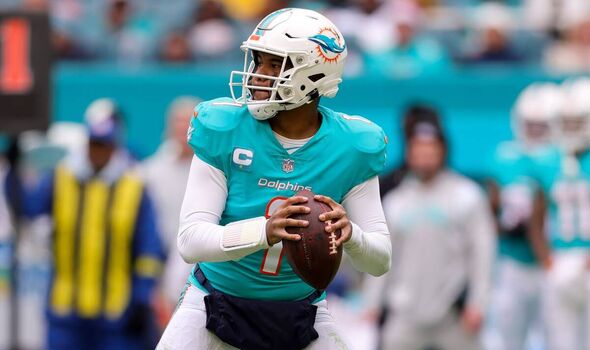 Tua Tagovaioloa has been warned he could be forced to retire after enduring two concussions this season – however many believe he suffered three. Tagovailoa will be unable to play in the Dolphins’ Play-Off game against the Buffalo Bills this weekend due to him not passing concussion protocol.

Tagovailoa’s breakout year in the NFL has been masked by concussion problems. The Dolphins quarterback first entered concussion protocol after his head smashed off the turf against the Buffalo Bills early in the season. That incident was officially put down as a head and neck problem.

The quarterback was sacked and it then appeared he had suffered a concussion, as he got up from the turf before falling back down. Then, just four days later, he suffered a concussion against the Cincinnati Bengals. In the aftermath, he was advised to retire by a neurology doctor.

On Christmas Day, Tagovailoa suffered another concussion, after being sacked against the Green Bay Packers. He missed the final two games of the season for the Dolphins, and remains in concussion protocol.

As a result, he’ll miss this weekend’s game against the Bills, and NFL expert Stephen A Smith has warned the young quarterback his career may be over before it’s even begun.

“Four days later, four, he shouldn’t have been allowed to play against Cincinnati. When you talk about concussion protocols or whathaveyou, it’s not about what the tests show, but also what your eyes see, that plays a role.”

He added: “This is serious stuff. When you consider [the concussions] mixed with his lack of size, how miniature he is compared to the football players on the field smacking him and putting that collision on him, and the fact he’s in that situation now, this is serious. I’m sorry, this is a serious, serious issue. This young brother’s career is in jeopardy before it’s even had the chance to get started.”