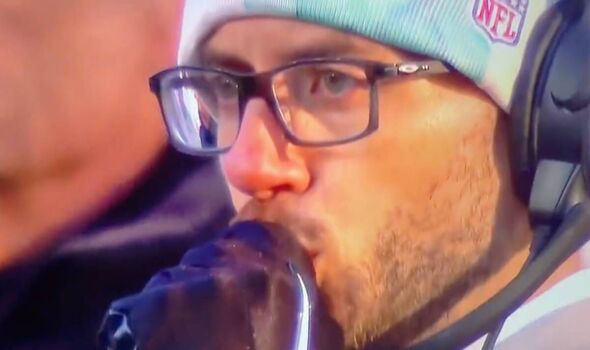 NFL fans are convinced Miami Dolphins head coach Mike McDaniel was smoking a vape on the sideline as his team were eliminated from the Play-Offs on Sunday night. The Dolphins were beaten by the Buffalo Bills in New York, ending their season.

The Dolphins went into Sunday’s game as heavy underdogs, considering the Bills are one of the favourites to win the Super Bowl this year. They were also without megastar quarterback Tua Tagovailoa, who has been unable to clear concussion protocol.

The Dolphins put up a good fight, but were ultimately second-best and beaten 31-34. One incident in particular seemed to split the opinion of NFL fans, however, when Dolphins head coach McDaniel was seen allegedly smoking on a vape pen.

During the game, McDaniel was seen with his hand slightly covering his mouth, before he moved the microphone from his headset away from his mouth. At that point, there appeared to be a small black item in his hand.

Many fans on social media claimed that was, in fact, a vape pen. McDaniel appeared to take his hands to his mouth and cup his mouth, with some suggesting he was smoking.

However, despite the footage going viral on social media, there might be a very simple explanation for the clip. Highmark Stadium, home of the Bills, is a no-smoking stadium, with that rule including vape pens.

It should also be noted the weather in Buffalo on Sunday night was -3 degrees, so it’s highly likely McDaniel might have just been blowing on his hands to keep them warm.