BREAKING NEWS: Damar Hamlin tweets there is ‘nothing I want more than to be running out that tunnel with my brothers’ as Buffalo Bills prepare to take to the field for the first time since his cardiac arrest

Damar Hamlin claimed there is ‘nothing he wants more than to be running out of the tunnel’ with his teammates as the Buffalo Bills prepared for their first game since the safety’s cardiac arrest Sunday.

The 24-year-old has continued to make positive progress since collapsing on the field during the first quarter of the Bills’ game against the Cincinnati Bengals Monday night.

Ahead of Buffalo’s Week 18 game against the New England Patriots at 1pm Sunday, Hamlin took to Twitter to support his teammates. 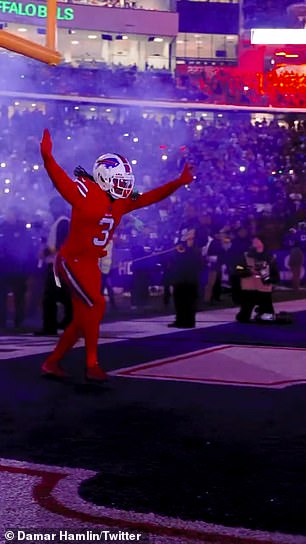 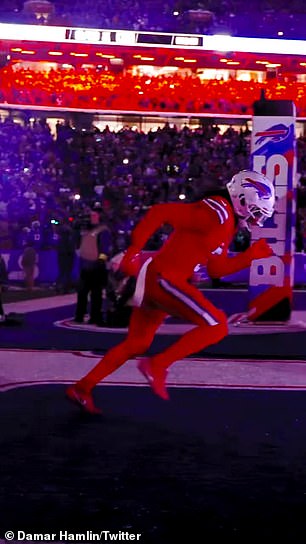 He revealed that he desperately wants to be taking to the field with his ‘brothers’ but insisted that God is using him ‘in a different way today.’

He shared a video of him running out of the tunnel during a previous Bills game and wrote: ‘GameDay.. Nothing I Want More Than To Be Running Out That Tunnel With My Brothers. God Using Me In A Different Way Today. Tell Someone You Love Them Today! let’s go @BuffaloBills.’

Hamlin’s Game Day tweet comes after he took to social media for the first time since his cardiac arrest to thank fans for their support in an emotional statement on Saturday evening. 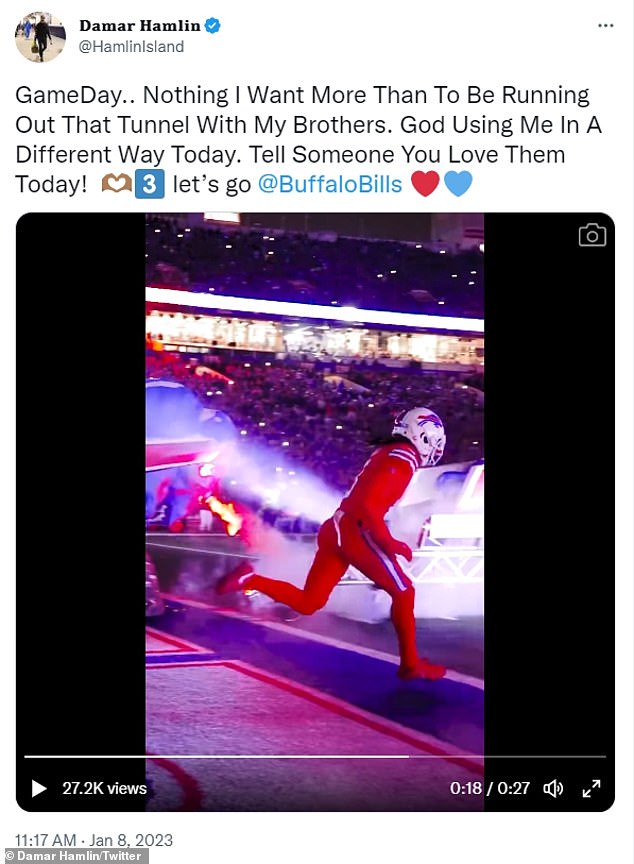 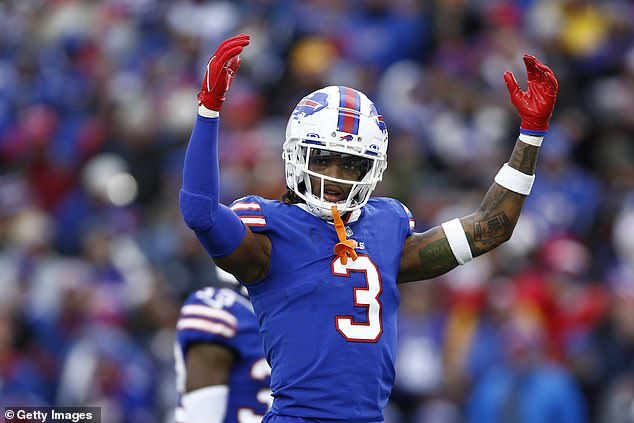 Despite wanting to be with his ‘brothers’, Hamlin said God was using him in a different way

The Bills safety wrote on Instagram: ‘When you put real love out into the world it comes back to you 3x’s as much.

‘The love has been overwhelming but I’m thankful for every single person that prayed for me and reached out. We brung (sic) the world back together behind this.

‘If you know me you know this only gona make me stronger. On a long road keep praying for me.’

He put out a similar message on Twitter, writing: ‘Putting love into the world comes back 3xs as much… thankful for everyone who has reached out and prayed. 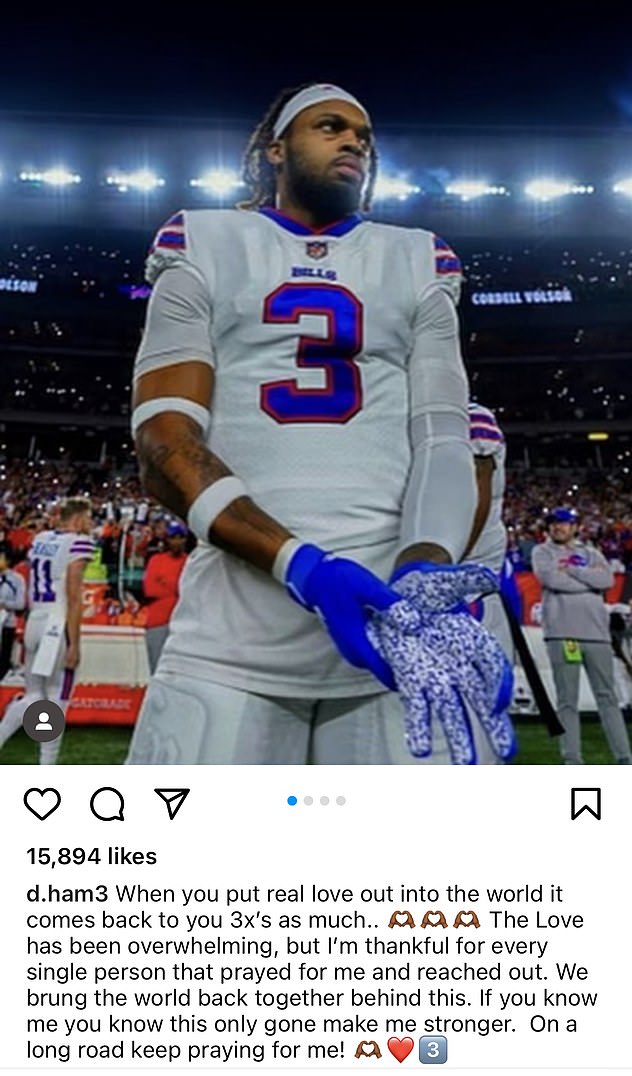 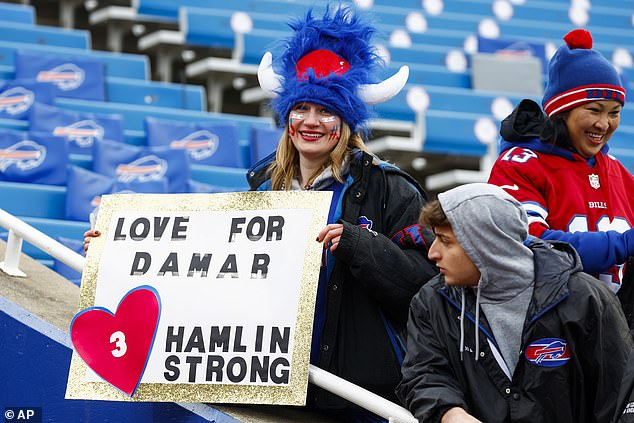 ‘This will make me stronger on the road to recovery, keep praying for me!’

Hamlin collapsed and had to be resuscitated on the field after suffering a cardiac arrest following a tackle with Cincinnati Bengals’ Tee Higgins during the first quarter of the Monday Night Football matchup.

On the play the 6-foot, 200-pound Hamlin was injured, Higgins led with his right shoulder, which hit the defensive back in the chest. Hamlin then wrapped his arms around Higgins’ shoulders and helmet to drag him down.

Hamlin quickly got to his feet, appeared to adjust his face mask with his right hand, and then fell backward about three seconds later and lay motionless.

The Bills safety was surrounded by players from both sides and treated for 16 minutes before being immobilized and taken off the field to hospital.

Although he remains in critical condition, Hamlin has shown encouraging signs in recent days. 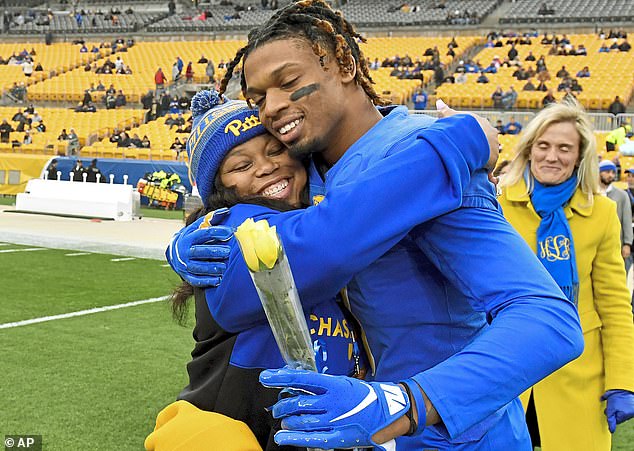 Hamlin is pictured with his mum, Nina, before a Pitts game against Boston College in 2019

Doctors said Saturday that his neurological function is ‘excellent’ and he is now breathing without a tube.

The Bills released the details Saturday, with the statement on their official Twitter account reading: ‘Per the physicians at UC Medical Center, Damar is making continued progress in his recovery yet remains in critical condition.

‘He continues to breathe on his own and his neurological function is excellent.’

The Bills were given a big surprise on Friday when Hamlin spoke to them via FaceTime, saying ‘love you boys’ and flexing his arm muscles following the removal of his breathing tube.

Bills head coach Sean McDermott spoke to the press after the interaction with Hamlin and attempted to describe the scene to reporters, but admitted he ‘probably won’t be able to do it justice.’ 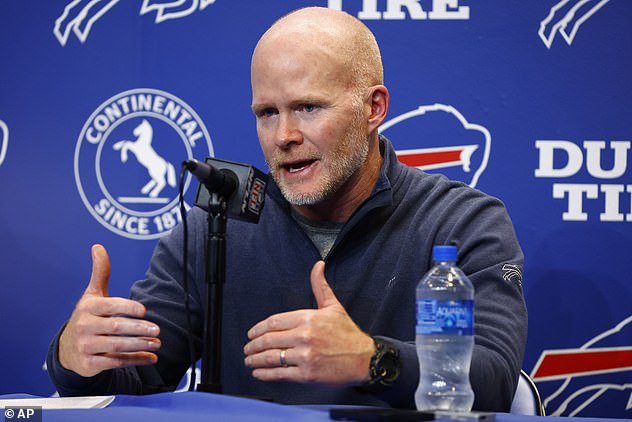 ‘Amazing, touching, to see Damar,’ McDermott began. ‘No. 1, through my own eyes. I know that’s something I’ve been looking forward to, kind of needing to see I guess. And then to watch the reaction in the room with the players and the staff and the team.’

The NFL confirmed earlier this week that the pivotal game between the Bills and the Bengals would not be resumed with adjustments being made to the playoffs in the instance that the cancellation affects the AFC Championship game.

However, while the MNF showdown will not be continued, the league’s entire Week 18 slate has gone ahead with the Bills facing the Patriots Sunday.

In the team’s first media availability since his collapse, McDermott claimed that the Bills ‘owed’ it to Hamlin to play Sunday’s game.

When pressed on why his team have to play this weekend, McDermott revealed that Hamlin’s dad Mario had told them it is what his son would want.

He said: ‘I feel strongly that as his dad Mario had mentioned to us, that this is what Damar would have wanted. We owe that to Damar and to his family.’ 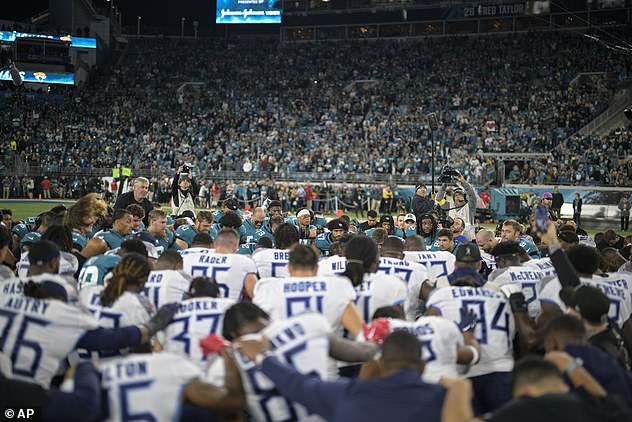 The Kansas City Chiefs and the Jacksonville Jaguars already played Saturday with both clinching victories over the Las Vegas Raiders and Tennessee Titans respectively.

Before kickoff in Saturday’s late game, the Titans and Jaguars came together as one to pray for Hamlin in the middle of the field during their warmup.

Hamlin took to Twitter again, minutes after, to say: ‘The love is felt, & extremely real.

‘No matter race or religion everybody coming together in prayer!’