For a man whose words speak of no great love of St Andrews, Matt Fitzpatrick is in danger of being contradicted by his actions around the lumps and bumps of this revered strip of land.

He certainly is not playing like a golfer trapped in a difficult relationship with his surroundings, having manoeuvred his way into yet another promising position for the final day of a major.

Sufficient to win from seven back? That is probably a bet best avoided, as it would require too many unrealistic scenarios among the groups behind him today. But at nine under par, and tied eighth going into his fourth loop, the US Open champion is once more tracking for a very prominent finish on the leaderboard. 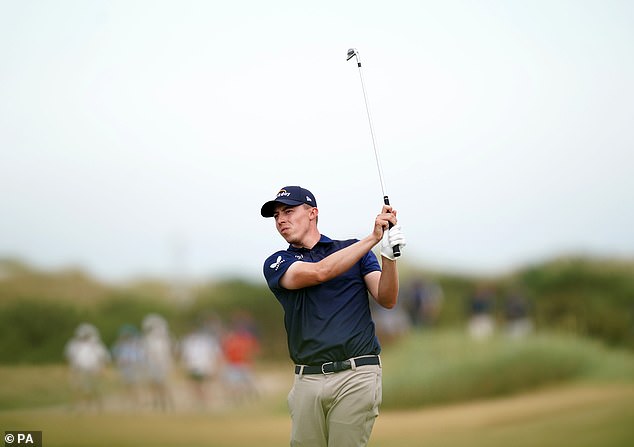 If he feels any regret when the swinging is done, it will derive from what he perceived as insufficient reward for his efforts on the Old Course. ‘Not a fan’ was his post-round assessment of the links that are celebrated as the ‘home of golf’, which might rank as sacrilege to those who get romantic about these things, but it also seemed justifiable on the balance of his performance versus his numbers.

For a little context on that, his opening eight holes were an excellent demonstration of the breadth of his skills with all clubs, and yet the scorecard showed he had regressed by a stroke from his 36-hole position of six under. If conventional wisdom tells us the good bounces will counteract the bad on this beautiful, unmade duvet of a course, then Fitzpatrick had cause to feel aggrieved — he was handed no gifts from the land.

His move came at the ninth, where he got himself back to six under, and from there two more birdies followed in succession as his putter heated up. He gained another stroke at 14, gave it back at the Road Hole 17th, which played like a brute all day, and then closed to a massive roar from the gallery with a birdie at 18. It was officially a 69, following the second-round 66 that undid the damage of an opening 72, but he carried the look of a man who had been given change for a fiver from a twenty.

‘I’ll be honest, I’m not really a fan,’ he said of the course, which has been made all the more quirky by the firm conditions. ‘I’ve heard it on commentary all week — you can hit good shots and get bad bounces. And you can hit bad shots and get good bounces. For the first seven holes, I didn’t really miss a shot and I’m walking off the seventh green and I’m plus-one. It’s tough to take. It’s tough to stay patient.’

Asked if his discomfort was the course or the conditions, he added: ‘Probably more the golf course. I said earlier in the week that it’s not my favourite golf course to play. But I think, obviously, with how firm it is, they obviously exaggerate some of the slopes and stuff as well. You see where the pins are this week — a lot of them are incredibly tucked, just to try to protect it as much as possible.’

For all his frustrations, Fitzpatrick is again in a fine spot. After going 14-5-1 in the first three majors of 2022, he is well set for his fourth round, even if the 27-year-old is too much of a realist to dream of a comeback for the ages. He said he could not ever remember overhauling a seven-shot deficit, even in junior golf, so it would take collapses from Rory McIlroy and Viktor Hovland to make it remotely possible. 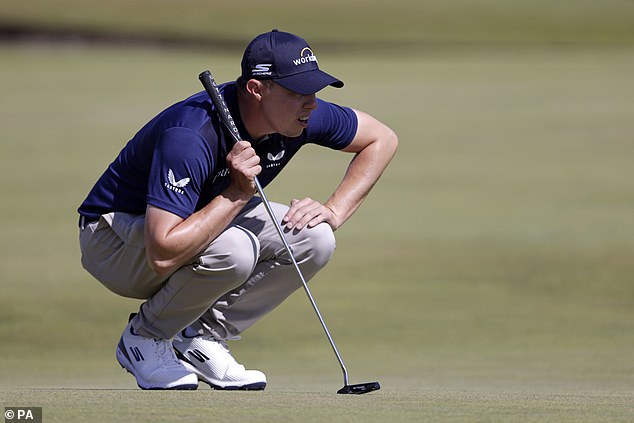 ‘I’ve never won from this far behind before, so there’s always a first time,’ he said. ‘But I just think, looking at the golf course, how it plays in the afternoon, they’ve got to come back to me, in my opinion. It’s difficult for me to make a real charge without someone else up there as well doing the same thing. I just think that’s kind of how the golf course plays.’

Tommy Fleetwood, also on nine under, had a more productive day in the favourable early conditions. The 31-year-old was fifth at the US PGA Championship a couple of months back, but has generally found consistency hard to achieve in the past two seasons. After a brilliant 66, he sounded like a man who is turning a corner.

‘It’s nice to be playing well again,’ he said. ‘Portrush (where he finished second in the 2019 Open) feels like a long time ago. I feel like I’ve been improving and results are coming. Last year where I was nowhere to be seen in a way.’

Tyrrell Hatton’s charge appears to have stagnated after a 73 brought him back to seven under. While his temperament did not reach its molten potential, he did appear frustrated around the turn with the slow play of his playing partner Talor Gooch.

Playing down that issue, Hatton said: ‘There’s no point blowing that out of proportion. There’s certain shots that, if you’re in between clubs, you’re going to take more time and that was just probably one of those moments.’