St Andrews: Min Woo Lee is in the three-ball that gets the 150th Open Championship under way at 6.35am (3.35pm AEST) on Thursday, with the ceremonial opening shot to be hit by the 1999 champion Paul Lawrie and their number completed by Webb Simpson, the 2012 US Open champion.

It is the second time the honour has fallen the way of Lawrie, a Scot who also did the job at the 2010 Open, although Lee, the 23-year-old from Perth who qualified by virtue of being in the top 30 of the European Tour at the end of last year, has some doubts about his early start.

“It’s good and bad, I guess, but it might be an advantage weatherwise,” he said as he left the range and rushed to the first tee for a practice round with Anthony Quayle, born in the Northern Territory, domiciled in Queensland and who tees off in the main event for the first time just before 11am, about the time Lee would expect to be finishing. 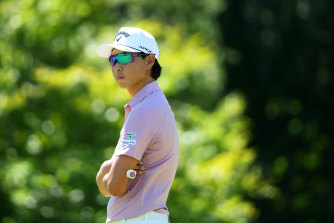 Min Woo Lee will be in the first group to tee off at the 150th British Open.Credit:Getty Images

Lee was second-guessing weather conditions, which for the past few days have included benign starts to the mornings and by mid-afternoon strong westerly, sideways winds blowing through the course. The ground conditions are hard and firm too. Tiger Woods, playing his sixth Open here, opined that the fairways may well be quicker than greens that have been kept watered and grassed to negate the chances of moving balls and wind delays, one of which delayed the 2015 Open finish to Monday evening.

Lucas Herbert follows Lee out an hour later in the company of two Americans, Kurt Kitayama and the 2013 Open champion Phil Mickelson, a leading light in Greg Norman’s controversial Saudi-led LIV Golf series and who has seemingly put himself into semi-cold storage, reportedly asking to sit out the champions’ dinner and the four-hole past winners’ event on Monday and which featured a host of past Open successes, 1991 winner Ian Baker-Finch among them.

Cameron Smith, winner of the Players Championship in March, is joined by Brooks Koepka, a four-time major winner and another LIV man, and Ireland’s Seamus Power, a late developer who is having the time of his life at 35 on the US PGA Tour, with an 8.03am tee-time. Brad Kennedy, in his fourth Open appearance and yet to make the cut, is out soon after in company with the two-time Open champion Ernie Els and Spain’s Adri Arnaus. 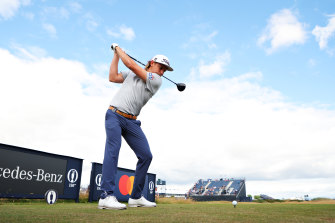 Cameron Smith tees off the third during practice at St Andrews.Credit:Getty Images

Jediah Morgan, the Australian PGA champion and another LIV convert, comes next but for Friday’s second round the 22-year-old will be in the first game, again at 6.35am, along with Mark Calcaveccia of the US, the 61-year-old 1989 Open champion, playing his last unless he contends and manages a top-10 finish.

One of the marquee matches of the afternoon will be Marc Leishman lining up with two Masters champions: Adam Scott, who has been showing improved form with a tied 14th at last month’s US Open, and Dustin Johnson, whose late move to LIV was the tipping point which started the second wave of big-name defections, at 1.15pm.

Leishman is well-prepared after missing the cut at the nearby Scottish Open and arriving on Saturday rather than Monday. “I love it here, it’s my favourite place on the rotation, not only the golf course but everything about it – it’s a great place to be,” said the US-based Victorian, who lost out in a play-off here to Zach Johnson in 2015. “I’m staying in a hotel in the town. I might have one or two beers early in the week, but I’ll lay low and try and conserve energy. This course’s defence is the bouncy, dry conditions right now – it will play short, but it means the greens will be firm. It’s going to be good.”

That might not be the case for two of the later starters, Matthew Griffin and Dimitrios Papadatos – out after Jason Scrivener, in the no man’s land of mid-afternoon, which now seems almost reasonable – who will feature in the fourth-last three-ball and will doubtless find out all about putting on the heavily trafficked greens and negotiating the winds that Lee was happy to have missed.