Just to be clear, Greg Norman, a mistake is what you made on the 12th hole at Augusta in 1996 when you dumped your ball into the water and watched it, and your Masters hopes, sink.

The murder and cutting up of a journalist critic of a Saudi prince by agents of that prince, the same prince who is now funding your multi-billion dollar drive to gut world golf and feast on the entrails, is not a mistake. Not to any normal mind. 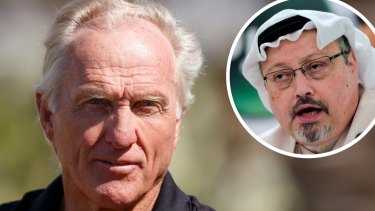 “Look, we have all made mistakes, and you just want to learn from those mistakes and how you can correct them going forward,” you said from the seclusion of a British country club on Wednesday when spruiking this new enterprise.

Learn? Correct? Move on? Did you hear yourself? 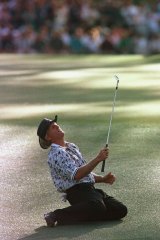 Since you seem to have left your moral compass on your private jet, here’s how you can tell the difference between a mistake and brutal, cold-blooded, state-sponsored murder:

To make good your mistake at Augusta, you probably adjusted your grip, stance, mindset, whatever, and never again hit a ball quite like you did that fateful day. You made a few other ratty swings that round, and lost the tournament, but you went forward.

Even if he tried, crown prince Mohammed bin Salman could not adjust journalist Jamal Khashoggi back into an intact human being again. Khashoggi will never again move forward, not one millimetre (though he might turn in his grave if he hears of your stunningly callous apologia).

Sure. But it’s kind of hard when MBS – as you so affectionately call him – and his golf buddies recently executed 81 men in a single day in their backyard. OK, you’ve got to maintain law and order, but even for the Saudis, 81 is a bit over par, surely? Another little flub, I suppose?

“I look forward. I don’t look back. I don’t look at the politics of things,” you say. “I know the mission I have as CEO of LIV golf … I’m not going to get into the quagmire of whatever happens in someone else’s world.” 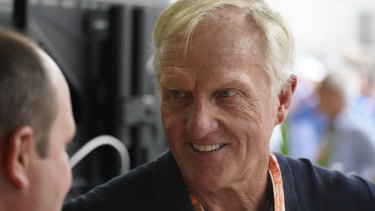 Um, that someone else’s world and its corpse-laden quagmire is your world now. You’re taking their money and doing their bidding.

It’s not like there’s a Swiss bank account or a Cayman Islands holding company to obscure the trail. MBS’s public investment fund fully owns LIV, which fully owns you. You’re cleansing the bloodstains from that money. It’s called sportswashing. The Saudis practically invented it. 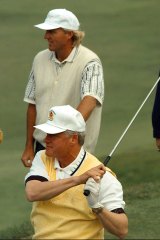 But you don’t do politics, of course. Oh, except that time when you didn’t want to play golf with Bill Clinton in Australia because you disagreed with his, um, politics, until George Bush, a politician, told you that you should.

Still, it’s different over there, right? Besides, anyone can make a mistake, no? A mere human rights oversight? A momentary burring of the bonesaw, a little slip of the scimitar?

Well, no. A mistake is what you made on the fourth and last play-off hole at the British Open in 1989 when you did not allow for adrenalin, belted a drive into fairway bunker 320 metres away and let Mark Calcavecchia in for the win. You managed to move forward from there.

Try moving forward as, for instance, a woman in Saudi Arabia. Try as a gay person. Put yourself in the shoes of your gay friends. “I’m not sure whether I even have any gay friends, to be honest with you,” you say. Well, knock us over with a tee peg.

To be fair, who hasn’t accidentally incorporated systemised bigotry into their lives now and then while playing tootsies with a hardline Islamic theocracy? It’s a learning experience, a chance to correct, a way forward. It all comes down to your stance and your grip.

But don’t mind us. You’ve got a golf circuit to organise, and as of this week, an extra $2 billion to tip into it, thanks to good old MBS, maker of the odd forgivable mistake. Of course, that means waving wads of riyals in the faces of the world’s best golfers, who are already lining up for their cut.

And if US and European tours fine or ban players as mooted, you have the answer, the same answer as to every other question, the answer that atones for every mistake. If fines, you’ll pay them. If bans, you’ll pay lawyers to make them go away.

At the Masters in 1987, Greg, you didn’t make a mistake as such. Rather, your little-known opponent Larry Mize holed a chip shot from 40 metres on a play-off hole to snatch certain victory from you.

You had the world’s sympathy then. Australia put its arm around you. But in the decades since, the wreath of national favour has fallen from your head and the cloak of immunity slipped further and further from your shoulders, leaving us to see you for what is: a bloke who once played golf quite well.

You’re now the Great White Witchetty Grub, and what was the Mize mishap has retrospectively become, as a colleague wryly noted, one of the great days in Australian sport.