Southampton, Bermuda: Lucas Herbert of Australia went birdie-bogey-birdie during a crucial stretch on the back nine and held on to win his first PGA Tour title at the Butterfield Bermuda Championship on Sunday (Monday AEDT).

Herbert’s two-under 69 lifted him to 15-under 269 for the event at Port Royal Golf Course, one stroke better than Patrick Reed and New Zealand’s Danny Lee. He took home US$1.17m ($1.55m) for his efforts. 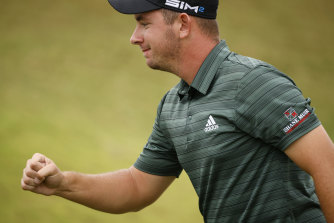 Herbert made a lengthy birdie putt at No.12 to take the lead for the first time, but he gave it right back with a bogey at the par-3 13th. At No. 14, his putt from across the green broke left to right and caught the right lip of the cup, propelling him back into the lead.

“We’ve holed an obscene amount of putts from outside 25 feet this week and got over that one on 14, just went like, ‘This is my range, I’ve holed so many, this is my range,’” Herbert said. “The whole way, it’s just like, that’s not missing. Yeah, obviously caught the ledge and got in there, but I felt confident before I even hit the putt.”

After that putt dropped, Herbert finished with four pars to stay a nose above the pack.

“It’s really tough to keep your mind from jumping too far ahead and thinking, you know, what are you going to say in the winner’s speech or what’s the photo going to look like with the trophy?” Herbert said. “I had to make sure that I kept myself in check, there’s still a tournament to be played.” 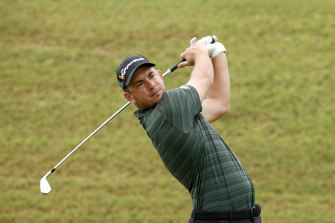 Herbert’s two-under final round of 69 was enough to give him his first win on the PGA Tour.Credit:Getty

Herbert entered the week as the No. 57-ranked player in the world and already had two European Tour wins to his name.

Lee held the lead at 15-under as he made the turn, but at the 12th a series of misplayed shots led to a double bogey. He went on to bogey the next two holes and seemingly drop out of contention, but Lee followed with three straight birdies at No. 15-17 to give Herbert a scare.

Lee’s hectic round went down as an even-par 71.

“A lot of good and a lot of bad,” Lee said of his day. “I fought really hard for it, just 12 through 14 was a very, very tough stretch for me. I hit a really, really good shot on 12, just went over the green by I don’t know how much, but it was kind of a tough shot from back there. Made a silly double there. I was just kind of a little confused with my putting.”

Earlier in the day, Reed shot a six-under 65 to reach 14-under, establishing the number to beat. Reed, the highest-ranked player in the field, made seven birdies and one bogey and posted his best finish since an ankle injury and a bout of pneumonia in August.

“I think it gives me a lot of confidence,” Reed said. “Ever since I got back from being sick, it just seemed like the offence wasn’t quite there. I wasn’t making enough birdies and when that happens, one loose swing here or there, it turns around, try to salvage a mediocre round. This week I definitely produced enough offence, but I need to take away some of the careless errors.”

Patrick Rodgers (70) placed fourth at 13-under. Scott Stallings shot the round of the day, a bogey-free nine-under 62, to jump to 12-under.

Canada’s Taylor Pendrith, who shot a 61 Friday and held the 54-hole lead by three strokes, scored a five-over 76 Sunday without a birdie or better on the card. He tied Stallings for fifth at 12 under.

Of the other Australians to make the cut, John Senden recorded a two-over final round to finish three-over for the weekend tied for 67th, while Brett Drewitt was tied for 39th at four-under.