Golf’s LIV defectors are pariahs as far as some professionals are concerned, but one former Ryder Cup player has found some understanding for their defection. Jamie Donaldson, who represented Team Europe at Gleneagles in 2014, admitted he understands why some players would jump at the chance of a bumper payday, even if it means leaving the PGA and European Tours.

The Saudi-backed rebel series has managed to convince some of the sport’s biggest names to defect. Phil Mickelson was one of the first, justifying that decision by claiming it was “a once-in-a-lifetime opportunity to reshape how the PGA Tour operates”.

And he was soon joined by fellow veterans like Ian Poulter, Lee Westwood and Sergio Garcia. Few were surprised to see some of the older players in the game taking the chance of a big payday before retirement, but it was much more shocking when some of the sport’s younger stars made the switch.

American stars such as Bryson DeChambeau, Brooks Koepka and Partick Reed all caused a stir, as did Dustin Johnson – so far the highest-ranked player to defect. They have all been slammed by many of their fellow pros like Tiger Woods and Rory McIlroy, but 46-year-old Donaldson says he understands why people would join. 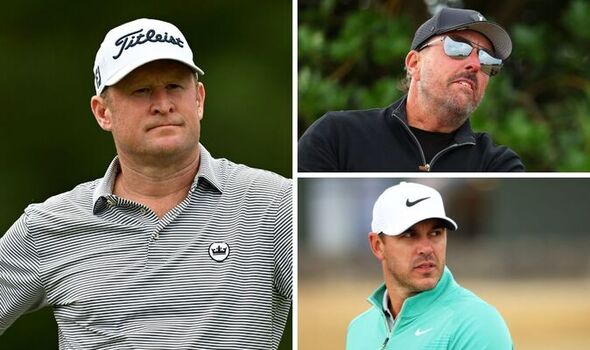 “I get it [with] the older guys,” the Welshman told BBC Sport. “But the younger guys, I find it harder to believe that they’re going when they can still compete on the world stage.

“I would find it hard to turn down, me personally. For an older guy that’s not as competitive as he was, not competing as well in majors, I think it’s difficult for people to turn down.”

Now 163rd in the world rankings, Donaldson’s finest hour came at that Ryder Cup in 2014 when he secured the point his team needed to win the competition. He was in the Top 50 around that time, and now that he is no longer near the top of the sport he feels it would be an ideal time to join the LIV series.

“We don’t get paid to play in the Ryder Cup.” Donaldson added. “There were bounce-offs in sponsorship possibly for some golfers. It was the greatest thing I have ever been a part of and there was no money involved. But at the end of the day if you are older and you don’t feel like you can get in another [Ryder Cup] or you don’t feel like you can compete in majors as you once did, it’s different then, isn’t it?

“You have got family and you can now play less golf [with LIV golf] for more money. You can spend more time with your family and everyone else is better off because of it. How do you say no to that? Personally, can I still get into a Ryder Cup team? I kind of believe that I still can if I have an absolute blinder of a year.

“Is that realistic? Can it happen? Possibly. But if you feel as though it’s not going to happen and then somebody is offering you cash that you have earned in your career again, just as a one-off, to go and play in Saudi, I don’t see how you can say no.”