The world No.2 Australian, the highest-ranked player to defect from the PGA Tour to the Saudi-backed concept, shared the lead with two holes to play on Monday morning (AEST) as he made a charge in the final round of the 54-hole event.

But the British Open champion stumbled with a bogey on the first, his second-last hole of the tournament owing to the shotgun start, to leave him a shot adrift of eventual winner Dustin Johnson. The American beat LIV Golf debutants Joaquin Niemann and Anirban Lahiri in a three-way play-off.

Smith (14 under) still finished in a tie for fourth with former world No.1 Lee Westwood (62) after his final-round seven under 63.

“I thought I was really out of it [after the second round], I played pretty poorly but to get out here today and to do what I did was pretty cool,” Smith said. “It was just an unfortunate bogey there on the second last hole. It cost me a spot in the play-off.

“I’d like to think I’ve got a pretty good following here in Boston. Every time I come up here there’s people rooting for me, and I don’t know if it’s the hair. It was great out there. The competition is fantastic. It’s loud and it feels like the course has a heartbeat. I love that and can’t wait to keep going.” 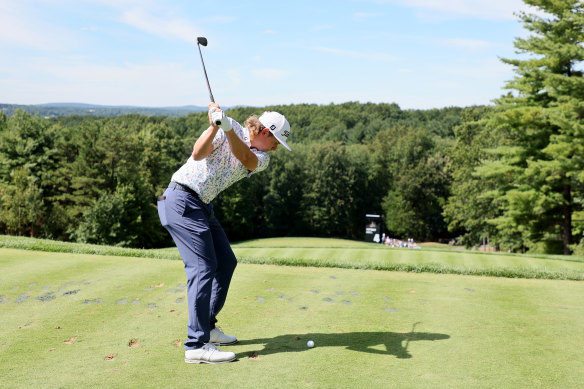 Cameron Smith teeing off in Boston.Credit:Getty

Smith was last week unveiled as Norman’s biggest scalp in golf’s civil war on a reported $140 million contract just to sign on with LIV Golf, bankrolled by Saudi Arabia’s public investment fund. He was joined by fellow Australian Marc Leishman, who was part of Smith’s all-Australian team called Punch GC.

Leishman (four under) and two-time Australian Open winner Matt Jones (four under) finished tied-26th in the 48-man field at Boston. The other Australians in the field, reigning Australian PGA champion Jed Morgan (five under) and Wade Ormsby (even), were also outside the top 20.

The crowd at Boston repeatedly chanted the name of the mulleted Smith, whose first appearance at LIV Golf was preceded by Norman skydiving and landing on the fairways at The International.

Players broke with golf tradition and wore shorts during the tournament under LIV’s relaxed rules.

Norman is intent on bringing a LIV event to Australia next year, which will be headlined by Smith, who has been suspended from the PGA Tour after the season-ending FedEx Cup play-offs. His world ranking will slide in coming months given LIV Golf is yet to be granted official status.