And there’s no troubles for Smith off the tee as he lasers a drive right over the hotel and safely into the fairway.

For those of you just joining us, the Queenslander, a mad rugby league fan who was jubilant with the Maroons’ State of Origin win last week, has been bogey free so far today and reeled off five straight birdie to start his back nine to charge into the lead.

McIlroy, too, hasn’t had a blemish on his car through 15 holes but has only made the two birdies compared to Smith’s seven. It hasn’t been a great day for Hovland, who hasn’t been able to get anything really going with a couple of bogeys and a birdie.

Smith about to hit his approach to the 17th…

Smith heads to the road hole

It’s been a whirlwind day for Smith, and he’s just made par on the 16th after a lengthy birdie putt just shaves the hole. He won’t mind that as he stays at -19 for the tournament and seven-under for the round as he heads for the famous road hole, and arguably the most famous bunker in world golf.

He’s been excellent off the tee and has a drive straight over the hotel to contend with.

Over to you, Mr McIlroy.

Welcome to our live coverage of The Open

Good morning and welcome to our live coverage of the final round of The Open as Australian Cameron Smith chases his first major and the claret jug, arguably the most coveted prize in world golf.

We’re in the final stages of the last round and Smith, who started the day four shots behind joint leaders Rory McIlroy and Viktor Hovland, has a one-shot lead from McIlroy with three holes to play. American Cameron Young is a further shot back.

Strap in as we take you through the closing stages at St Andrews. 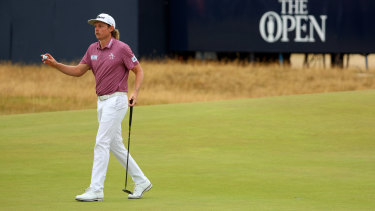