Frank Warren has confirmed that he will be sending an official written offer across to Anthony Joshua’s team today for a fight with Tyson Fury in November in the UK.

Speaking to talksSPORT Breakfast this morning, following an appearance from Eddie Hearn, Warren said: “We’re sending a written offer across today to them. My son George spoke with Eddie Hearn yesterday.

“It’s us who have made the approach to give AJ a great opportunity to get himself back into the top level against the world champion Tyson. He’s willing to make that voluntary defence, so we’ll send the offer across today and then they’ll have to look at it and decide whether they wanna grab this with both hands.”

When asked about when they are aiming to stage the contest, he added: “In the UK and hopefully in November, that’s what we’re looking at.” Fury had originally stated that he would be taking a fight in December after the news that Oleksandr Usyk would not be able to partake in their proposed undisputed unification bout until next year. 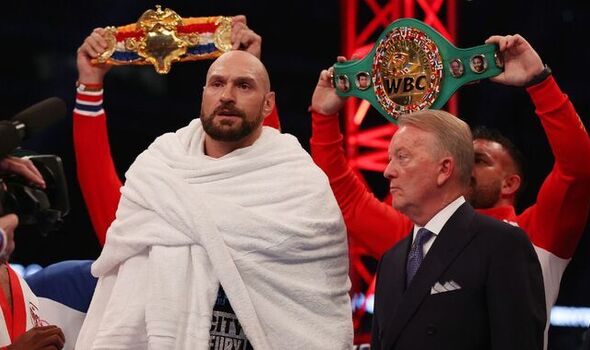 Keen to keep the ball rolling, Fury took to Twitter to offer AJ a showdown for his WBC title, which was quickly verbally accepted by the Watford powerhouse. But despite Fury and his team’s clear willingness to make the fight happen, Hearn remains sceptical and told the same radio station earlier this morning that he is unsure of the offer’s legitimacy.

But Warren claims that people will be ‘shocked’ by how fair the deal is. “They haven’t even seen the terms yet so I’m certainly not going to be discussing it publicly. The terms that we are gonna put forward I think are very, very fair,” he continued.

“We’ll put it into writing and then they can make their decision. We’re talking about being very, very fair. Tyson is being extremely fair and if and when these come out, if they wanna publicise them, you’ll all be shocked.”

Fury had previously stated that he would take the Joshua fight for free and that he would only stage the event if it was free to air on British television and free of charge to enter.

For the latest news and breaking news visit: express.co.uk/sport/football
Stay up to date with all the big headlines, pictures, analysis, opinion and video on the stories that matter to you.
Follow us on Twitter @dexpress_sport – the official Daily Express & Express.co.uk Twitter account – providing real news in real time.
We’re also on Facebook @dailyexpresssport – offering your must-see news, features, videos and pictures throughout the day to like, comment and share from the Daily Express, Sunday Express and Express.co.uk.